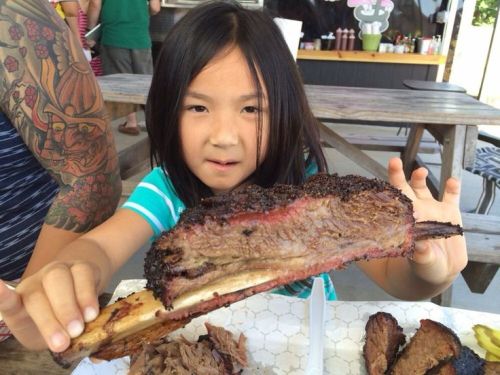 The festival, which sells out every year, will showcase smoked delicacies from 27 of the state’s most celebrated barbecue purveyors, all of whom have been honored by the magazine’s coveted list of “The 50 Best BBQ Joints in the World!” Guests are encouraged to sample from as many BBQ vendors as their stomachs will allow, plus many sweet treats.

As a new addition this year, Texas Monthly debuts the TMBBQ Brisket Brunch on Saturday, October 29, from 11 a.m. to 1 p.m. at Juliet Ristorante (1500 Barton Springs Rd). Spotlighting TMBBQ Fest’s first-ever “Global Joint” from France, the event will feature an original BBQ brunch menu from Pitmaster Thomas Abramowicz, of the Beast of Paris, France, and Chef Jacob Weaver, of Juliet Ristorante.

Tickets are $85 each for a meaty brunch menu with cocktails included. Tickets will be on sale with TMBBQ Fest tickets starting Thursday, September 8, at 10 a.m.

As is tradition, the magazine has invited one “Newcomer” to the festival, with Evie Mae’s, of Lubbock, receiving the nod. Newcomers who quickly rocketed to the top of their field have included Freedmen’s, in Austin; Austin’s Franklin Barbecue; Pearland’s Killen’s Barbecue; and Dallas’s Pecan Lodge. New to this year’s festival, the magazine introduces a “Global Joint” with Paris’s the Beast.

“We’re thrilled to host an honored ‘Newcomer’ from Lubbock, along with a ‘Global Joint’ all the way from Paris, France! Offering readers more of what they crave, the TMBBQ Brisket Brunch will provide a one-of-a-kind up-close experience with an international pitmaster partnered with a local chef. Held on Saturday, the event will act as a ‘morning meat up’ before the TMBBQ Fest gets started on Sunday,” said John Lunn, the president of Texas Monthly.

“Thanks to an ambitious Frenchman, Thomas Abramowicz, and a few pitmaster mentors in Texas, there’s now honest-to-Texas barbecue in Paris, France. We can’t wait to host Abramowicz when he brings a taste of the Beast to Austin,” said Daniel Vaughn, the magazine’s barbecue editor.