The a la carte menu is shared or family-style dining with an emphasis on high quality cuts of meat, sides and carefully selected wines. Owners Alda Boiani and Sidiclei Demartini, both with 50+ combined years in the restaurant industry, are hoping to create an atmosphere that will emulate the romantic culture found in Buenos Aries – the birthplace of Corrientes 348.”

They are transforming the 10,000 square foot space into a stunning restaurant using natural woods, vibrant textures and colors. 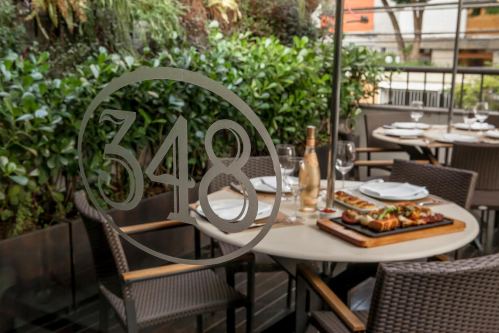 Argentinians have a fondness for meat, or rather an “asado” or “parrillada.” Meats are cooked on a parilla, (grill), while attendees enjoy socializing and drinking wine, typically a Malbec. Parrilla culture is largely about patience and enjoying the company they keep. Staying true to their roots, the restaurant will have a dramatic open flame parilla (custom-made in South America) anchoring the main dining room with 20 seats surrounding it.

Seating capacity for the entire space including bar, grill, main dining, two private rooms and outdoor patio will be close to 300.

Corrientes refers to the famed street in Buenos Aires, the capital of Argentina. Corrientes 348 is an address mentioned in the famous tango, “A Media Luz” sung by Carlos Gardel (a famous Argentinian musician in the 1920’s). The first Corrientes 348 restaurant was opened in South America, in 1997 by Eduardo Santalla (a native of Argentina) found a vacant restaurant that coincidentally had the address of 348, remembered Gardel’s tango and the rest is history. This family-owned business was purchased in 2014 by Jair Coser; Boiani and Demartini joined the group to bring the concept to Dallas. There are currently seven in South America with Dallas being the first United States location.

The team at Corrientes 348 look forward to introducing Dallas to its first Argentinean steakhouse concept.