Having received much traffic in its flagship Southlake location, Delucca Gaucho Pizza & Wine has opened its second restaurant in Dallas’ Design District. Owner and Chef Evandro Caregnato believes that Delucca’s new location is more centralized, shortening the commute of guests from various parts of the DFW metroplex.

At Delucca, guests are served pizza in gaucho fashion, in that they pay a set price and are able to try various types of pizza, similar to a churrascaria. Caregnato’s mission is to offer guests flavors from all over the world. Delucca is a one-of-a-kind cultural opportunity that everyone in Dallas must experience.

Delucca is best known for their Caipirinha cocktail, which consists of cachaça, sugar, and lime. It can be ordered with blackberry or passion fruit flavoring.

Another good choice is the Raspberry Lemon Drop, which is made with Grey Goose Citron, raspberries, fresh lemon juice, and Cointreau. 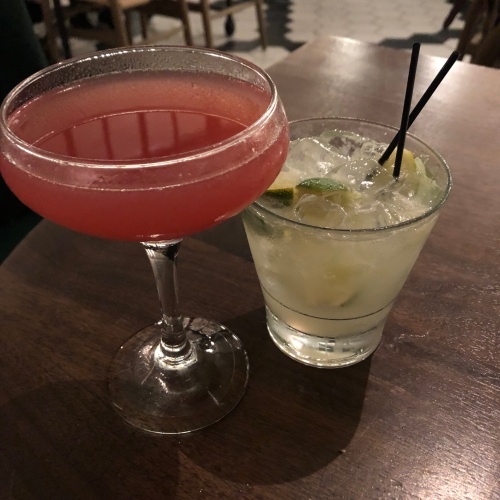 Upon arriving at the table, guests are given a charcuterie which consists of olives, different types of cheeses, arugula, peppers, salami, and olives, along with a tiny, sippable glass of lobster bisque soup. These meats, cheeses, and greens are the real deal, packed with spice and bittersweet flavors. The starters are a precursor of the exquisite delights to come.

After finishing the charcuterie and bisque, guests can flip the card on the table from red to green, indicating to the servers that they are ready to sample the pizzas. Delucca offers 15 different types of pizzas, which may sound overwhelming, however, they are light and thin in size, allowing guests to try them all without feeling physically inundated. Of the 15 pizzas, the top three are the chicken tikka masala, the Turkish lamb with sumac onions, and the Mexican elote with crema fresca.

After finishing the savory portions, the sweets are a must. Delucca offers five indulgent dessert pizzas, including the Italian Nutella, banana flambé, dulce de leche and toasted coconut, roasted pear with gorgonzola and honey, and blackberry and mascarpone.

While the idea of fusing cultural elements from all over the world into one single restaurant may sound superfluous, Delucca pulls it off flawlessly. It is one of the most exciting restaurants to open this year and has something to offer even the pickiest of eaters.