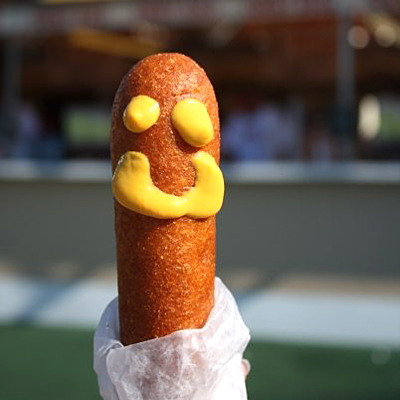 Fletcher’s Original State Fair Corny Dogs, LLC is pleased to announce it has achieved an important victory in a trademark dispute with a company that is seeking to unfairly capitalize on the reputation of the famous Fletcher’s brand.

Neil and Carl Fletcher, invented corn dogs in Dallas, Texas, in 1938 and introduced them at the 1942 State Fair of Texas. Over the past 77 years, millions of people have enjoyed Fletcher’s brand corn dogs, and the Fletcher’s name has become world-famous, symbolizing our delicious meal on a stick. Today, Fletcher’s brand corn dogs can be enjoyed at the great State Fair of Texas, as well as fairs, festivals, and events both public and private throughout Texas and the southwest. Fletcher’s is an iconic brand to the many fans who travel to the Texas State Fair to relive childhood memories as they enjoy one of our Fletcher’s Original Corny Dogs and introduce their own children to this longstanding Texas tradition.

In September 2019, Fletcher’s Original Corny Dogs reluctantly filed a trademark infringement case against Victoria Fletcher, Jace Fletcher Christensen and their recently-formed company, Fletcher-Warner Holdings. Fletcher’s brought this case because the Defendants, without consent, began using the confusingly similar name “Fletch” to sell corn dogs. Fletcher’s filed the lawsuit to prevent its loyal fans from being confused in the marketplace and to protect its trademark rights.

Out of all the possible names the Defendants could have chosen for their new venture, they chose the confusingly similar name “Fletch” because it would associate them with Fletcher’s to consumers. Their use of the name Fletch immediately caused confusion among consumers and the public as to the source, affiliation, and sponsorship of Fletch’s corn dogs. Corn dog fans, event organizers and the media alike, long familiar with the quality and reputation of Fletcher’s™ brand corn dogs, mistakenly believed that Fletch was somehow affiliated with Fletcher’s and their products were from the same source.

“We are thrilled with the court’s ruling and are grateful for the public support and enthusiasm of our many fans. We regret the confusion some of our fans experienced from Fletch’s actions, but we hope that the court’s order will quickly begin to eliminate the confusion so that our fans may be assured that they are enjoying genuine Fletcher’s brand corn dogs,” said Amber Fletcher, on behalf of the Fletcher family. “We feel a deep sense of gratitude and are excited to move forward and focus on the many exciting events and projects Fletcher’s has happening this year.”

The Fletcher family is aware that the Defendants began actively pursuing media coverage for their new venture in the press over the past week, even after the federal court issued its oral ruling on January 13th. Instead of responding in kind, Fletcher’s chose to wait for the federal court to issue its written opinion. Much of last week’s media coverage is inconsistent with the court’s order.

As the evidence showed in court, Defendants chose the name “Fletch” because it associated the new and unrelated company with Fletcher’s longstanding reputation for selling popular corn dogs. It was not innocent. The Defendants intentionally passed off their business and corn dogs as being affiliated with Fletcher’s. They misled consumers and event organizers, which believed that Fletch was Fletcher’s, or at least affiliated with Fletcher’s. As the court made clear, it is no defense that “Fletcher” is part of Chistensen’s name because a person has no absolute right to use their name as a trademark for their merchandise or business.

It is unfortunate that Defendants over the past week chose to refer to the proud Fletcher name and the iconic Fletcher’s Original State Fair Corny Dogs brand as the “F” word. Before filing suit, Fletcher’s gave notice to the Defendants of the confusion, requested that they choose a non-similar name, and offered them time to re-brand their company. It was only when they refused that the Fletcher family decided they had no alternative but to pursue litigation to protect their fans and their famous brand. The Fletcher family has a history of hard work, creativity, and fun times. Fletcher’s wishes Defendants the best with their endeavors but insists that they comply with the law and switch to a name that is not confusingly similar to the famous Fletcher’s™ brand.