I’ll Have A Beard, Please 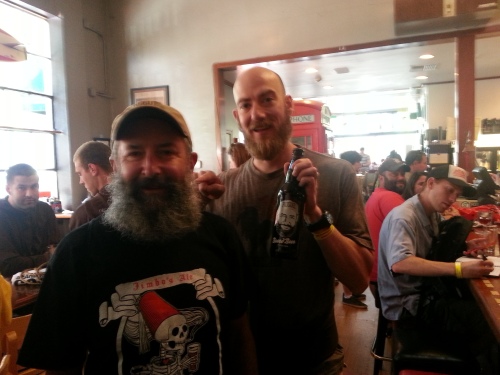 There are many stereotypes that I’m sure I embody, but at least two are centered around craft beer culture. Let’s discuss…

Let’s start with the beard.

Having just come off my first impromptu beard competition win at the House of Blues Local Brews and Local Grooves this past weekend, I freely admit nothing is more stereotypical about a craft beer drinker, brewer, sales rep, etc. than having a beard. I get it, I appreciate it, and obviously it doesn’t bother me. I didn’t always have a beard, but I’m glad that I do now. END_OF_DOCUMENT_TOKEN_TO_BE_REPLACED

I Before E Except After Beer

I’ve been accused of being a member of the Grammar Police and I won’t deny that I’m a bit of a pain in the ass when it comes to people using “to” in place of “too” or “your” in place of “you’re” or the misuse of everyone’s favorite trio, “there, their, they’re”. I try to let it go, chalking it up to people being lazy or just not paying attention, but when people start butchering names, my eye starts to twitch.

While perusing the social media craft beer group message boards, I often see Fritz Rahr’s beloved family brewery spelled out as Rarh or Rhar or the ever confusing Rawr. What are we, a pride of lions? I wonder silently if Fritz twinges when he sees this or if he just brushes it off since its probably been happening to his family for generations. But what about Michael Peticolas? Having recently sat down with Michael and his lovely wife, Melissa, I got a little history on the Peticolas name. Knowing what naming their brewery with their family name means to them, it makes MY head hurt when I’m looking over a tap list and read Peticola Seasonal. Really?! I see you have the local Peti Cola on here but I was wondering if you had any aged Crystal Pepsi Cola hidden in the back of the cooler? Some might explain it away as a limit of characters on the menu layout. Those explanations would be rebutted by the next line reading New Belgium Fat Tire. Count the letters and you’ll see that the argument of “not enough space” gets torn to shreds. People that use their own names for businesses want it carry a connotation of respect and recognition. Would it kill you to spell it right?   END_OF_DOCUMENT_TOKEN_TO_BE_REPLACED

There’s a definite trend in North Texas beer this season. Brewers are making a point to address the need for light, clean styles largely neglected in the craft world due to their domination by national macro-brews. What’s more interesting from my side of the bar though is the growing demand for more sessionable craft brewed beers, not only by existing craft beer aficionados, but by long time macro-beer drinkers interested in DFW’s local brewing explosion.

It’s no surprise, Texas’ climate, cuisine, and culture lend themselves to being complimented by something light and refreshing. At the beginning of our new wave of craft brewing, those of us who already had a taste for craft ales gravitated toward the huge flavors popular in other regions that we’d been exposed to in the past. Bitter West Coast inspired IPA’s, boozy Belgians, and malty stouts immediately became (and for many remain) some of the most sought after releases from the emerging brew houses. As a result, craft beer of any origin has become associated with a certain lack of accessibility to those who are used to the popular national brands.   END_OF_DOCUMENT_TOKEN_TO_BE_REPLACED