It’s that time of year again. Sweaty palms… jumbled thoughts… last minute mental rewinds… the unexpected quickening of what once went pitter patter as the dinner bell vibrates in the resounding clang of unspoken intimacy, understanding, and validation in four shared hours. “Nervous excitement” will come along once the curtain has already been drawn and there is time to reflect on the absolute greatness and freedom that came to pass at Underground 2012.

Valentine’s Day comes and goes and what memories survive the firesetting of Cupid’s arrows gone awry are more likely than not lost in the gifting and not much of a memory at all. It serves optimistically as an opportunity to correct the most egregious mistakes in gifting that closed out the previous year. I don’t mind crossing my fingers for you star crossed lovers out there. Romance is an art. I believe in Art. I believe in Love. I believe in Magic. As for February traditions? I believe in ArtLoveMagic.

ArtLoveMagic is entering its sixth year of taking inspiration and initiative to the playing field throughout the metroplex. It would be over the top to assume no entity prior was able to recognize the multitude of artists gone unnoticed in the DFW and throughout the world. In fact, this lack of recognition is glorified by posthumous fame and the martyrdom of the starving artist considered par for the course. This doesn’t even broach the concept of unfiltered artistic potential summed up with a multitude of what if s whispered in life’s passing shadow.

The collaboration of Michael Lagocki, Justin Nygren, and David Rodriguez transformed self affliction into proactive predilection and ArtLoveMagic was born so that artists, writers, and musicians alike have a foundation ripe for cultivating whispers into roars of acknowledgment. What if is the call of yesteryear. ArtLoveMagic exceeds the call to duty of self promotion, championing the underdeveloped artist through advocation of art education via technical and professional development workshops. In an effort to give back to the community as well as offering artists the opportunity to enact change, ArtLoveMagic produces Kid’s Workshops for the Dallas area community designed to foster encouragement of developmental skills in a creative safe space. 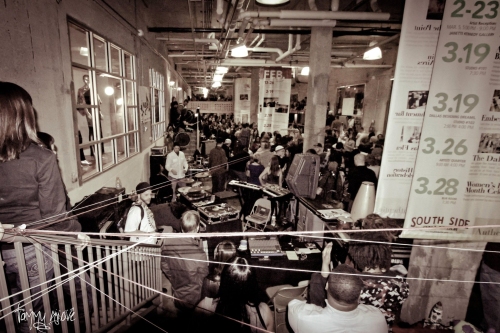 ArtLoveMagic is completely non-profit and depends on volunteers to keep the wheels of artistic freedom and expression churning. What these artists are given in camaraderie, they give back in hopes of a tomorrow free of self doubt in the rhealms of originality, talent, and vision.

Non-profit doesn’t mean these good deeds don’t have a cost. Rather than take that cost in overhead, ArtLoveMagic places the best foot forward once again. You didn’t think artists en mass gather to counsel one another through the poor mes, did you? A multitude of artists, writers, and musicians woven into a collective gung ho effort can only result in one thing… an event!

Underground is the most celebrated annual endeavor of ArtLoveMagic and the time is now if you want in on the festivities. Self-acclaimed as the “biggest, loudest, and freshest” show of the year, new and established artists of all genre share space and collaborate at will in live creation and presentation within a four hour time table. 2012 boasts over a 100 artists and performers, multiple stages, the infamous 21 and up Blue Room of sensual arts, the doubling in size of The Hallway live art presentation, the rhythm of Spoonfed Tribe, and interactive opportunities for those who want to join in on the creative flow.

Filed under Arts, Courtney Crush, South Side of Lamar