Pisco is a colorless or amber toned grape brandy made in Peru since the 16th century by Spanish settlers. Since that time pisco has been distilled using traditional methods, and Pisco Porton is one of the finer examples of the product. In the coming weeks we will explore how pisco is being used through out the city with some of our best bartenders Dallas has to offer. We have been invited as a small contingent that will seek out these unusual cocktails, and in turn I will turn you on to the spots region by region.

This past week we visited primarily the Uptown area of Dallas, with Daniel Guillen, the corporate barman for La Duni, as our spirit guide. Daniel has a wanderlust for a great cocktail and does some pretty terrific concoctions at la Duni. If you have ever been to one of his locations in Dallas you will understand.

“I try to make cocktails that can be created with consistency. There is nothing worse than having a drink one night, and have it be totally different the next,” said  Guillen. 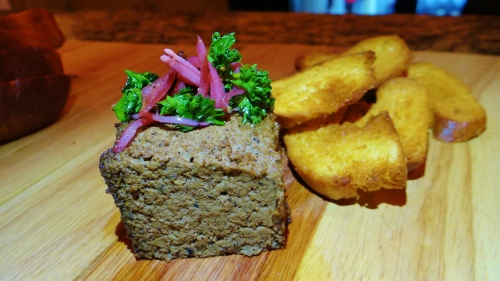 With that, we met first at the newish restaurant Joyce and Gigi’s Kitchen located just off Ross Avenue on the east side of Central Expressway. Here the young Gigi developed the cocktail menu using fresh juices and mixes that she enjoyed herself. The finest example of  a pisco cocktail is her creamy papaya pisco called the Sour Joyce. Joyce is anything but sour, but you will soon taste that the sour flavors are an exceptional use of the spirit.

We couldn’t pass on the menu at the restaurant, so we ordered a food appetizers, including the beef heart pate which was amazing. This is a restaurant you will want to add to your must try list.

Just a few city blocks away on Ross we ventured into another new-on-the-block cocktail hang out, the Sunset Lounge. We have been to the Lounge on several occasions and enjoy the cocktails. This cocktail menu primarily drives on tiki drinks, which can be so much fun. The use of fresh juices are in play at Sunset, and although they can sometimes be sweet, they are what Trebek would call potent potables. 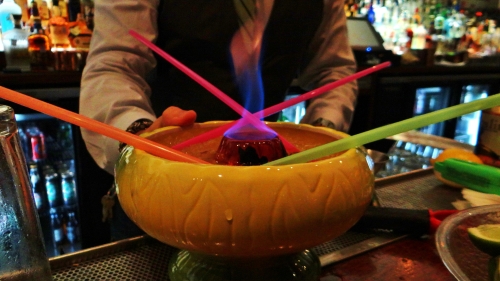 One perfect example of the most potent cocktail on the menu is the powerfully juked up Punch Bowl. The large bowl is filled with a mix of 14 ounces of hooch, including Pisco Porton, and a blend of juices. This is a sharable bowl at a price of $25 and is lit on fire for good measure, but stop in during happy hour to nab this one half price. It will be the only drink a single person would need. That, and a cab ride home.

You may want to sample some of the many tacos in play at Sunset. I love the grilled fish tacos, but they also have chicken and beef. All deliciously served with our drinks. 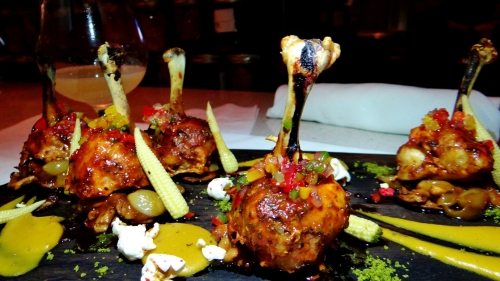 Moving on with determination we next visited Rocco at Private Social, or as they now prefer being called P|S. Rocco is a barmen’s bartender. He is always quick with a fantastic story, and a bit of hstory with each drink. This is what endears the man, and his talent is what brings us back for more.

Rocco concocted a Peruvian Shandy, made with Pisco Porton, fresh lemon juice and the Franconia Heffenwiezen. The drink was delicately balanced with a strong Pisco punch, which is definitely what you want. We enjoyed some unusual chicken wings that evening which were actually meaty legs that were Frenched and served spicy. Genius, to be sure. 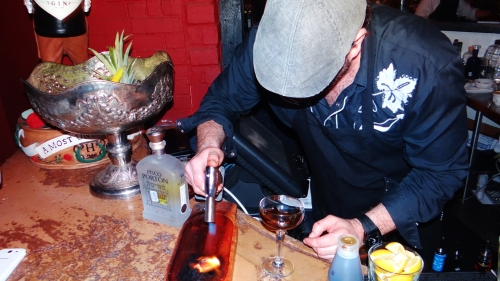 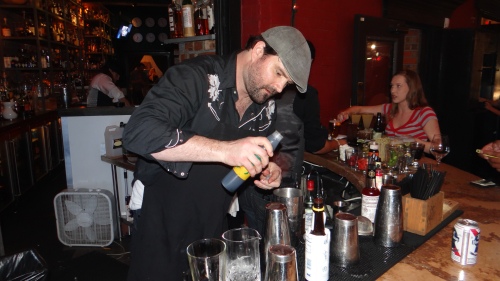 Making our way down McKinney Avenue in Uptown we stopped in to see Bryan McCullough at Standard Pour. Bryan is always knee deep with thirsty clientele, but took the time to create a wonderful cocktail that he called The Pisco Kid Rides Again Into the Fiery Sunset. I know this because he engrained the name into my brain four or five times. Each time he said the name he smiled a bit more. For the recipe bryan smoked balsamic vinegar using 2 ounces of Pisco Porton, a half ounces of lemon juice, one ounce of pineapple shrubb, an egg white and many dashes of Peychauds bitters. It was quite the presentation. 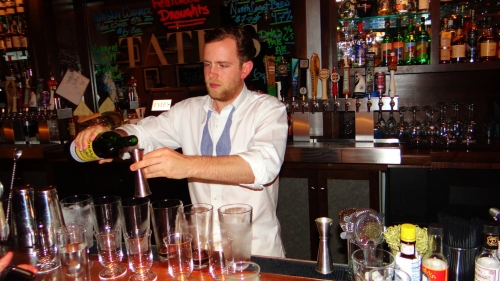 We were getting a bit buzzed so we decided to walk across the street for another good cocktail lounge, Tate’s Craft Cocktails. JW was waiting for us behind the bar and happy to make us a Pisco Porton laden cocktail. JW went to work at breakneck speeds and came up with what he called a Muy Criollo. This was by far the stiffest drink of the night and served straight up with Bonal Quina Aperitif, Clement Creole Shrub, and plenty of Pisco Porton. This was all strained over ice into a warm glass and dashed with Bitterman’s celery bitters for good measure.

When I asked JW about the cocktail’s name he quipped, “In Peru ‘creole’ has a different meaning without the baggage that it comes with here, but basically it translates to ‘a spirited way of life’.” We like that JW knows these things.

With designated drivers at hand, we called it a successful evening, and look forward to this week’s adventure where we will hit some amazing cocktailiers up and down Central Expressway in search of the perfect Pisco Porton.

One response to “Pisco Porton Tour Of Dallas Cocktail Bars”