It is eight thirty AM on warm, and warming, Saturday morning in McKinney, Texas. I am sitting in my car in a parking lot alongside more than twenty other cars awaiting a 50-seater coach to take us on a tour of four Texas vineyards in Collin and Grayson Counties. The tour, organized by the Texas A&M AgriLife Extension Service is for potential grape growers, wine makers or persons just interested in viticulture and enology.

The map below shows our route. From the parking lot we have a short drive to Celina to visit the Hornbaker Family at their Eden Hill Farm & Vineyard (A). Then a short spurt down the road to the oddly-named Square Cloud Winery (B) in Gunter. After that we trek all the way north to Grayson College Viticulture and Enology Department next to the Grayson County Airport (C). After lunch it is back south, and a ways east, to Grayson Hills Winery (D). Finally, almost home, to Mitus Hill Vineyard in McKinney (E). Everyone is ready to do lengthy walking around vineyards in steadily increasing temperatures as the days high is expected to be around 94⁰. Our tour guide is Chris Hornbaker, winemaker at Eden Hill, enology student at Grayson College and director of web design for a major semiconductor company in the area. This background lets him bring studiousness, experience and frustration to his commentary, even overcoming a glitchy microphone circuit.

Tempranillo Grapes at Eden Hill Vineyard. Note that the skins have not changed color to purple yet

Eden Hill Farm & Vineyard is located just out of Celina, about 30 minutes north of Dallas. The two acre vineyards were planted in 2008 and now comprise mainly Tempranillo with a little Orange Muscat. Clark Hornbaker is the viticulturalist and his son, Chris, the winemaker. Chris considers the northeast of the state to be one the two most promising grape growing areas (the other being the High Plains). Many growers in the Hill Country would dispute that, but he considers that area too hot.

The rows of vines line up east-west because that way went with the flow of the land when Clark planted them. He says that if he had it to do again he would line the up southwest to northeast to get more even sun exposure. The large number of unclouded sun-hours in Texas makes that a major issue and a lot of the resolution is in ensuring that vines have the right ‘canopy’ (basically trellising and cut) to ripen evenly, and fully. Clark shows himself to have a deft hand on the literature as he reels off names of prominent viticulturalists who have contributed to the area.

I taste the 2011 Tempranillo. Tempranillo always invites comparison with the wines of Spain where it grows in over a dozen major areas (and under more synonyms). Hornbaker’s early effort is surprisingly true to type with red fruit, tobacco and coffee in the nose, confirmation of the red fruit in the mouth and some herbal notes as well. The finish is surprisingly long. What is off putting is a lack of color saturation. The wine looks correct, but  thin, almost a rosado. Hornbaker is unconcerned, attributing it to shorter hotter growing season in Texas vs. Northern Spain. He adds “Recently, some Spanish producers have been pushed by wine critics to blend a bit of Syrah or Carignan into their Tempranillo to darken the color in what is considered more of an “international” style, to match the dark wines of northern California.  In our winery, we really wanted to see what a 100% Tempranillo from Texas tasted like, so we did not blend in any Syrah because we like the classic ruby red color of Tempranillo, and because we did not want to change the flavor profile…we wanted to taste Texas terroir.  Our customers also love the ruby red color of classic Tempranillo.   I suppose we could blend some Syrah into the Tempranillo in hotter years, but people have really fallen in love with the 100% Tempranillo and its native color, so I’d rather let the vintage speak for itself rather than try to change the color just to fit the international style, which is not what I’m trying to do as a winemaker.” 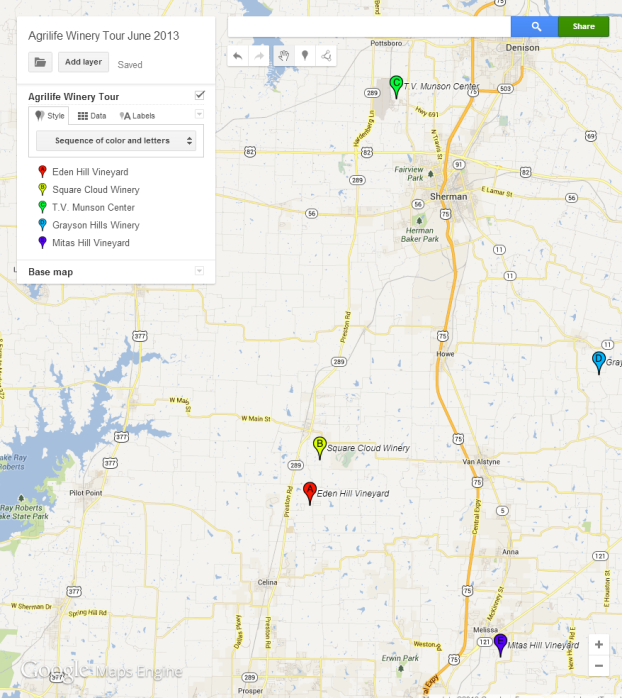 First: that name. Owners Jackson and Cheryl Anderson were walking the land just after purchase in 2005. They looked up and saw what they perceived to be a square cloud in the sky. It may just have been that they had consumed too much wine that day, but the name stuck.

It is not just the name that is unusual about Square Cloud. Anderson claims that he has more varieties of grapes planted, 29 (all vitis vinifera), than any other winery in the state. I will grant him this (former champ Vijay Reddy has 21 varieties). The major ones are Cabernet Franc, Syrah, Tempranillo and Malvasia Bianca. There are also plantings of Cabernet Sauvignon, Merlot, Tannat (recent) and Montepulciano.

I like his approach, providing he can pay sufficient attention to each one to establish replicable results about its characteristics. In terms of history, Anderson has figured out that Texas is at the state of finding out which varietals work best (about the same stage that California was in during the mid 1960s) and his kind of mass experimentation is most beneficial at exactly this point. He is like a private sector research nursery and he will probably deliver multiple millions of dollars of public benefits, although he may become a pauper in the process.

His vines are planted in southwest to northeast rows. They are carefully pruned and each decision reflects several years of learning by doing. For example, he has cleared ground cover between rows to lower disease and fungus pressure. Due to the rocky soil he has no issues with erosion. He dry farms right up to the point that Texas says no. Then he drip irrigates at night over several hours so that the water sinks deep into the soil as that is where he wants the roots to go. ‘Deep’ here is a relative term as two feet below the surface the clay soil ends and the bedrock of limestone (the crushed bodies of millions of sea animals from long ago when this land was under water) begins. This geological formation occupies a lot of the state and is a major factor in grape growing and the character of the resulting wines.

2013 is a big year for Square Cloud. Not only will they finally get a web site but they plan on making their first wine.

We stopped at the center for lunch and had a presentation on the Texas wine industry by Dr. Justin Scheiner.

In the 1870s T.V. Munson sent native American rootstock to France to be used to graft the vines of the great wines of Bordeaux. This halted the devastation of the phylloxera louse and saved the livelihoods of hundreds of thousands of people. Little wonder there is a statue to him in Cognac and he was awarded the French Legion of Honor Chevalier du Mérite Agricole.

Munson did most of his work in Denison, TX so it is fitting that an enology and viticulture department was established there and that the T.V. Munson memorial vineyard was established to preserve the cultivars that he created and be the source of new cultivations.

The T.V. Munson Memorial Vineyard at the Enology and Viticulture Center. Note the thickness of these vine stems, indicating considerable age

Grayson Hills Winery was founded in 1996 and planted from 1999 through 2001 by Rick and Connie Magers. The winery is set picturesquely at the top of a natural bowl on which grass grows in the center and vines down the sides. Until 2002 the winery could only sell grapes due to restrictive state laws against winemaking in ‘dry’ areas. The legal change was a boon to Rick who made a 2004 Cabernet Sauvignon that won Bronze at the 2007 Lone Star International Wine Competition.

Grayson Hills vines were planted on their native root stock and some vines have already been lost to phylloxera. As new vines are planted grafted rootstock is used. Looking down from the winery you see waves of mature vines that stand in sharp contrast to the pruned and regimented rows seen earlier. Many of the vines seem to be having a bad shoot day, reflecting perhaps a situation where maintenance is needed.

A visit to Mitus Hill Vineyard, just minutes from downtown McKinney is like a trip to a cross between a resort and Disneyland. The winery and tasting room is a virtually new building as impressive as anything in Napa. The grounds are manicured like an arboretum. The vines look like a military rank, stiff-backed and ready to perform a ceremonial march.

All of this is because Segway riding owner Harold Mitus has a vision for Mitus Hill in which wine is essential, but not the sole objective. Mitus Hill will become a destination for corporate and, particularly, wedding events. It will also become a private club in which members buy a row of vines and receive some of the wine harvested from that row each year.

Mitas Hill owner on his Seqway. Pristine vineyard in background

That is the reason that the vineyards look pristinely tidy. They are the backdrop to a million wedding photographs. That is why the ground cover is buffalo grass, that looks impeccable trimmed as tight as a tennis court. That is why Black Venus vines are strategically placed. They look good, even though they are not known for quality wine.

Tragically, a scheduling snafu meant that we were not able to taste any of Midus Hills’ wines, made by Harold’s daughter, who trained at U.C. Davis. They may be superb, but a future visit will have to discover that.

Four vineyards, four philosophies of vineyard choice and management. No wonder the tour was a sellout. Another one is planned for the fall. email the Collin County office of the AgriLife Extension to be put on the mailing list.