You recall Kirby’s steakhouse across from the Granada on Greenville Avenue, and more recently Wayward Sons the Graham Dodds resto which closed in February of 2017. It is a massive space yet the new tenant moved in a year after a major remodel and plans on being the best pizza inside the loop. I believe you will enjoy this Neapolitan pie. Some of you have tasted it year ago when we chatted about the Frisco location. It is good.

DFW has a smattering of pretty fantastic Neapolitan pizzerias including the the Frisco based  Pizzeria Testa Napoletana Restaurant which is owned by Rod Schaefer. Schaefer’s mother comes from a long line of Italian pizza makers. In fact the Testa family was once considered the royal pizza makers for the King of Naples.

Testa grew their chops with opening pizzaiola Michele D’Amelio who worked at the original pizzeria in Naples which invented the pie. In 2013 D’Amelio was pronounced best pizzaiola  on the planet. And he worked in Frisco at the time making pies for Testa.

Neapolitan is best consumed on premises and within minutes of baking in the 900-degree domed oven that was custom made in Italy. However, at Testa they can prepare your pizza for the road and give explicit instructions on how to  gently heat the pizza at home. Pies bought for home dining are never sliced to keep the integrity of the pizza intact. For this reason you are supplied with a professional pizza cutter to keep. 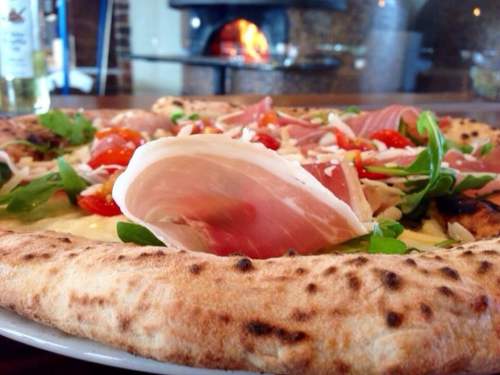 Check out the new Testa which is of course at 3525 Greenville and is going through a soft opening currently. Check out the famous metre long pizzas (just like they grow them in Italy). We  feel this is the finest example of the Neapolitan style in the Dallas area.

The new location is far larger than the original and we have a first look with photos provided by our own Joey Stewart. Thank you, Mr Stewart.