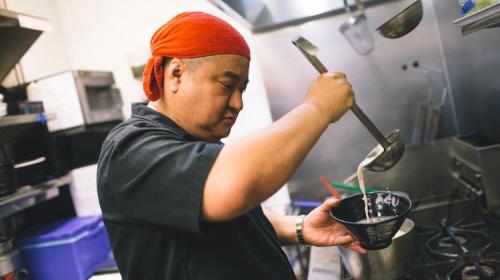 Agu Ramen is serving up the most authentic ramen you might be able to find in the Dallas area, making their own noodles and boiling pork bones for 24-hours as part of their tonkotsu, but also has a vegetarian and five vegan options. We might add that Agu is extremely vegan friendly and after speaking with the owner who is originally from Okinawa now residing in Hawaii, Hisashi “Teddy” Uehara, he plans to open a vegan restaurant in Dallas after visiting most of the vegan hot-spots in the area recently. 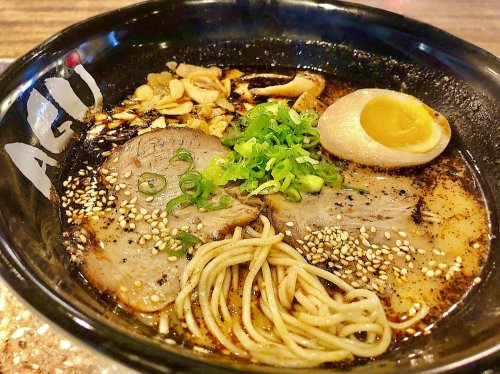 Speaking with several friends last night who live in Hawaii we found that Agu is the ramen of choice for the islanders who have a persnickety appetite for the broth and noodles. Agu is so popular that Honolulu named March 6th Agu day in honor of Hisashi and his bowls of noodles. After chatting with the owner for a bit we found him to be an over-the-top marvelous character who is vivacious with a bent on serving authentic cuisine from his home country.

Agu Ramen offers up jidori (chicken) broth, along with a kotteri tonkotsu, which features a thicker, richer broth than traditional tonkotsu. There’s also a selection of sides and bar snacks that range from spicy fries tossed in Cajun seasoning, chicken karaage, and freshly-made gyoza. You will also need to sip the delicious Orion beer from Okinawa.. A delicious light lager that pairs extremely well with this ramen, especially if spiced up as in the OG Kotteri which can be dialed up fairly high with the additions of Thai chiles.

When envisioning his signature ramen bistro, Hisashi realized that a restaurant’s popularity and success depend not only on the food, but also on the patrons’ overall experience. He explains, “I want to bring smiles and happiness to our customers. I wish to enrich their hearts through food and culture. In Japanese, we say ‘magokoro,’ which means ‘sincerity’. This is my joy and driving force.” So, like the ancient clan of samurai, the AGU team is also dedicated to maintaining a strict code of excellence.

Agu is located in Mockingbird Station in Dallas with numerous locations in Houston. Look for at least one more Agu in the Dallas area soon.