Founder, Nikky Phinyawatana says, “We are thrilled to introduce Asian Mint to Richardson and feel confident this transformation was a smart move. We are also celebrating our 15th anniversary this month and feel it’s perfect timing for the opening.”

Asian Mint is a restaurant where guests can have fresh Thai food prepared in a healthy way in an inviting but modern atmosphere while enjoying a nice bottle of wine or Asian inspired cocktails and end the meal with a selection of house-made Asian inspired desserts.

Phinyawatana, who created the concept after a journey of self-actualization strives to prepare and cook meals that will feed each guest both physically and spiritually. “When people come to Asian Mint, we want them to feel happy and leave inspired.”

Asian Mint’s menu offers approachable twists on Asian staples, including fried rice, soups, pad thai and stir fry. Many of the dishes also contain red, yellow and green Thai curries, which is said to contain healing elements. “We have a lot of people who come in craving our yellow curry because we use a lot of turmeric,” Phinyawatana says, “Turmeric is anti-inflammatory. Your body craves these foods because they help them heal from the inside out.” 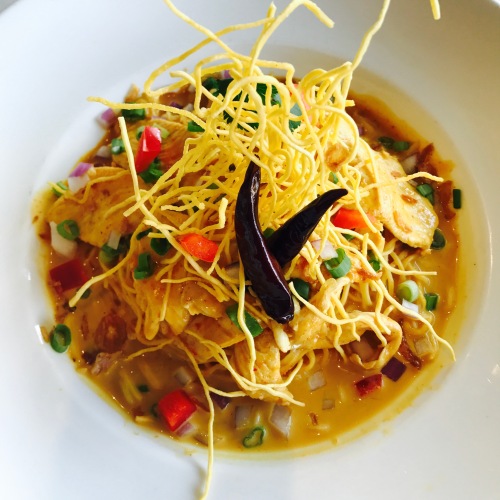 In addition to curries and turmeric, Asian Mint utilizes a great amount of herbs such as mint, basil, ginger, lemongrass and galangal. Almost every dish at Asian Mint can be made vegetarian or vegan with 75 percent of the dishes being gluten-free.

The new Richardson restaurant also has a full-service bar offering Asian inspired cocktails, beer, earth-friendly wines and mocktails. A dedicated door and counter were built in for take-out orders to make it simple for guests to pick up their orders quickly.

Phinyawatana tells us, “Prior to opening my first restaurant, I was young, living in Boston and trying to figure out my next move in life. 9/11 happened, I had quit my corporate job and life was missing something.

In 2002, she moved to Dallas to work for her father’s food delivery business. While she tried to figure out her next move, she sang in a band, waited tables and attended El Centro’s Culinary School.

Phinyawatana, who believes food is medicine for the body and soul felt Dallas was missing a Thai food element all those years ago. Growing up in Bangkok, she grew accustomed to Thai food being a quality dining experience with fresh ingredients prepared in a healthy and approachable way.

She opened her first Asian Mint in 2004 at Forest Lane and Central Expressway with Oak Lawn Avenue in 2008 and another in Inwood Village following in 2017. Richardson marks number 4.