Hofmann Hots will open its doors this Friday but we have a sneak preview of what is to come. We also had a chance to chat up mega-restaurateur Phil Romano for his take on his new fast and casual hotdoggery.

Romano was excited today as many of his friends and colleagues filtered through the yet-to-open restaurant. He has a very hands on approach to the inner workings, and even delayed the opening an extra few weeks as he personally tweaked the menu to his satisfaction. 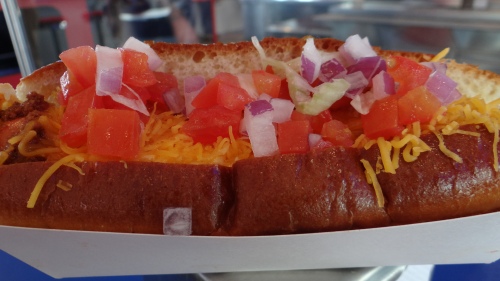 Romano had fond memories of Hofmann’s dogs since he was a child and when he had the opportunity to gather a group to purchase the factory in Syracuse, New York the man hopped on that quickly. Since then the company hired Bob Sambol to take the brand nationally, and the business has flourished.

“This is a little larger than we would normally do. But I want to get the product set, the equipment just right and get everything in place then roll it out to about the size of Subway. We won’t serve any beer or alcohol; instead it will be ice cream and custard. Of course we will have the hot dogs and a hamburger, but we didn’t want beer because we want to be able to place this anywhere we want,” said Romano.

Romano went on to say that there really wasn’t any good national chains that sold mostly hot dogs. He had quality assurance because he now owned the factory that produces the sausages.

Romano is gearing the restaurant to the Millenial Generation, or “New People” to use Romano’s terminology. These are young adults between the age of 16 and 32 years old.

“The New People don’t like our food, they don’t like our cars, they don’t like our clothes, in fact they changed the government. They want new things and different things. So these can’t be plain old hot dogs. They like different profiles of tastes so we are making that happen. We upgraded the hot dog; not so much price wise, but the flavors. In doing that we had to revamp the menu a bit,” explained Romano.

Romano wants to do to the hot dog as he did with the hamburger at Fuddruckers. This means he is baking his own buns in house. The bun comes out supple, with fantastic grilled sides for added flavor and texture.

Going into Hofmann’s you are presented with a few options. You can order the regular German Frank, or a Kielbasa.  There is also a fish option called the Sea Dog which is a kicked up fish sandwich in the hot dog bun. The Sea Dog was nice, especially when you added a side of Asain slaw to top the sandwich.

There are several of these specialty dogs available, but I really enjoyed the Himalayan dog with curry aioli and chutney. The chili dog was fat and messy as you might expect. The chili is made in house.

Look for Hofmann Hots to open their doors this Friday at 11am in the new Trinity Grove area of West Dallas at 340 Singleton Blvd, just across the Margaret Hunt Hill Bridge. There will be future editions of Hofmann’s across the city within six months.