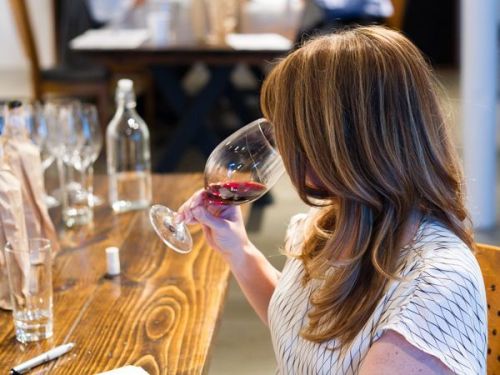 No fewer than 23 wines were involved in our taste-off

There is general agreement that Tempranillo is the red grape that has done best in Texas thus far. I decided it was time to do a comparative tasting in order to get an idea of how good Texas Tempranillo has become, and who is doing the best job with the grape. I put out an APB to every winery in Texas for their currently available Texas Tempranillos and received no fewer than 23 different wines from fifteen wineries in response. As with our earlier comparison of Texas Viognier, the tasting would be blind and the tasters would be volunteers from the Dallas sommelier community.

Seven sommeliers, plus myself, assembled at WinePoste.com in the Dallas Design District over several hours to sip and slurp our way through the wines. I excluded my scores from the results below as I was involved in the packaging of the wines into their numbered brown bags.

Each judge used their own scoring system. I then ranked each judges scores so that I could get an average across the seven judges. With 1 as ‘first’ and 23 as ‘last’ here is how the participants fared (including some ties):

My first impression from the tasting was how huge the variation was between the wines. Some reasons for this are clear:

All the wines could be described with Texas on the front label but several used more specific locations. For example, six wines used the Texas High Plains American Viticultural Area (AVA), and one the Texas Hill Country AVA. One even adopted the legitimate practice of using the name of the Texas county as the designated area of origin.

My second impression was how Texas Tempranillo as a category has improved over the long term. The best are now very good, something we will measure more precisely in a future tasting of Texas versus the wines of Tempranillo’s native country of Spain. While the best are better, it should also be said that the bottom of the scale is as bad as ever. However, placement in the rankings can be changed quickly.

My third impression was that experience counts. The top five wineries are all ‘old hands’ who have learned good winemaking and are now moving on to specialize and develop their own styles. McPherson Cellars (5th) even has the courage to call their Tempranillo just ‘Red Table Wine’ in the belief that its quality will speak for itself.

My best newcomer award goes to Calais Winery (7th) just six years old. Benjamin Calais is establishing himself now that he is finally on the list to get grapes from a quality vineyard. The winery is in Deep Ellum and worth a visit.

The judges did not hold back on their opinions. On the number one ranked wine, 2011 Pedernales Reserve, Jeff Solomon, of Max’s Wine Dive also rated it first and noted an aroma that was “bright red fruit, earthy, dirty, dusty with dried fig” and a taste that was “well balanced”. He summarized it as a “great representation of what Tempranillo can be in Texas”.

On the second-placed wine, 2011 Brennan Vineyards, Jeremy King with The Gaylord Texan Resort rated it a personal second and noted its ”rich dark fruit” on the nose and that in the mouth it had “great balance and a long finish”.

Brushy Creek Vineyards entered several wines and their 2011 Klassen Vineyards (the vineyard name is spelled that way on the label, but differently on the web site) placed fourth. It was the favorite of Chris Morgan, Divisional Beverage Sales Manager of Oceanaire/Morton’s. He said that it had a “dark, cherry, integrated oak. Not Rioja but good Tempranillo”. Anthony Martinez of The Gaylord Texan Resort placed it fifth in his ranking noting that it was “showing nice fruit and low to medium tannin”.

The fifth-placed 2011 McPherson was “young, green” with “fresh strawberry” and was “clean” according to Jamie Glover of Lesko Enterprises

To consumers: Consider a Texas Tempranillo with your next steak, lamb or barbecue. Also, on day trips, consider visiting some of these producers and tasting these wines on their premises.

To sommeliers: Use the results here as a guide for the best choice for your list;

To the wineries and grape growers in Texas: Stay the course. Tempranillo was one of the ‘right choices’. Quality continues to improve and this is the path to greater consumer acceptance.

Overall, a very instructive tasting and a compelling snapshot of the state of Texas Tempranillo. The grape has come a long way in the state but still has a way to go. Future Crave tastings will try to assess it against Spain and Tempranillos from California, Arizona and other promising areas.

These wineries are all small. Order direct from the winery web site or, in the case of some, from the Amazon.com wine site. If you are out of state, and experience problems with either of the above, call the winery to see if they have a legal way to deliver to you.