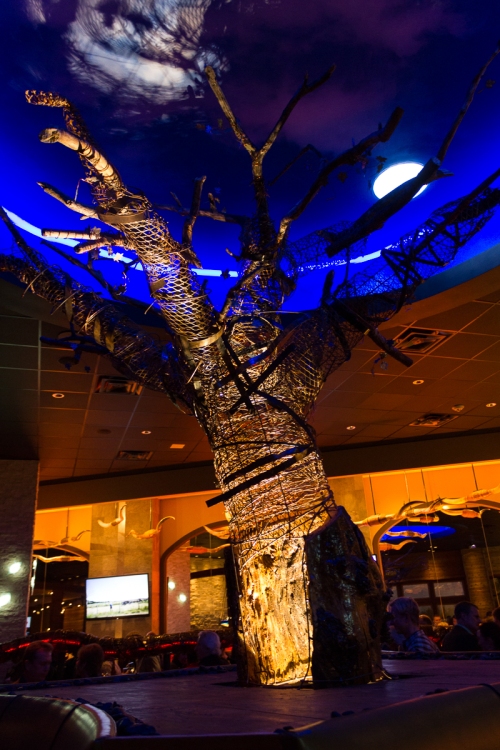 There are few restaurants in the Dallas area that speak to its Texas roots as Stephan Pyle’s restaurant Stampede 66 located in its sprawling digs as big as Texas itself in the tony base of the Park 17 on the southern most cusp of Uptown. Here you will witness a sultry West Texas big sky as you dine on refined vittles under the moonlit caricature Pyles has created. Nothing is business as usual in the Pyles world; instead things are larger than life as honorably displayed on large platters of fried chicken oozing honey, or v-shelved tacos filled with rich and meaty brisket or delicately fried Gulf oysters.

Stampede is where locals and tourists alike get to play JR Ewing to a fanciful version of chicken fried steak. Executive Chef Jon Thompson calls this menu “Modern Texan”, but we call it dinner. Things are kicked up a few levels at Stampede as evidenced by the shrimp and grits dotted with a largish sphere of condensed shrimp broth that is to be macerated in the bowl to create this explosive flavor bomb. An unusual touch that begs for another bite.

Start your evening off with a cool cocktail. One of our favorites comes from the angelic mind of Dotty Griffith, the iconic Texas cookbook author and former Dallas food critic. You simply must sample the cocktail named for Dotty which contains a simple mix of Deep Eddy Vodka and Texas grapefruit. It is as satisfying as it sounds.

You will also want to partake from the offerings of the roving margarita cart where a Texafied young lass uses science to make one of the creamiest frozen margaritas we have ever experienced. A giant bowl is filled with liquid nitrogen then given a good douse of Patron Silver Tequila, Prickly Pear Fruit and Patron Citronge. Once the ingredients are situated they are stirred to this creamy mix that is just a bit frozen, then spooned into a large margarita glass and dotted with candied jalapenos. This is by far the best margarita you will ever taste.

Dinner commences with tasty selections such as wild boar barbacoa and sweet potato tamales, or any number of selections from the taco bar including Gulf By-Catch fish tacos or chicken adobo. the tortillas are hand-made in house and packed with flavor and texture. You may wish a pre-dinner bowl of red with or without Pyles’ version of Freetos. Not to be missed.

The menu is definitely stick to your ribs with big plates such a giant haunch of wood grilled ribeye with a mess of root vegetable hash, or the barbecued brisket that has been sous vide and smoked in an operation that takes several days to complete for maximum tenderness and maximum flavor. The brisket is served with a side of home-style potato salad that will have you licking your plate, and we are pretty sure that is allowed in the restaurant regardless how beautifully everyone is decked out. They will want to raise their plates to their face as well. 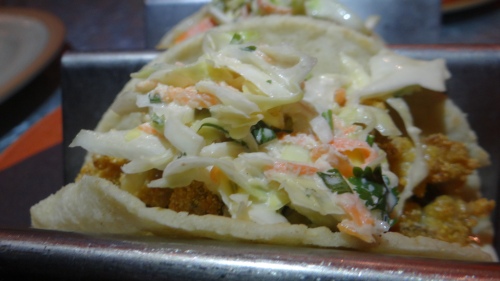 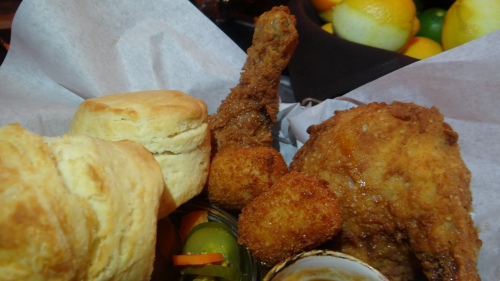 One word about the fried chicken. It will no doubt be the best version you have ever tried, and it is actually injected with honey for that insanely good flavor. An obligatory ‘yeehaw’ is due about right here.

Desserts are not an after thought at Stampede. One suggestion will do you quite well, and is large enough to share with a table of guests. Do try the pineapple upside down cake that is actually based in a carrot cake (best of all cake worlds). The cake is supplemented with an extremely rich cream cheese ice cream and topped with shards of beautiful carrot “glass” for a perfect finish to the evening.

Ride the range soon, but you will want to make reservations. People are definitely stampeding into this lovely Dallas restaurant.

The Big Sky photo is courtesy of Robert Bostick