Restaurant genius Phil Romano is opening yet another restaurant in Trinity Groves. The latest to join the ranks is a fast casual spot called Potato Flats. Think fancy baked russet and sweet potatoes stuffed with a whole host of  fresh chef prepared items. These are not your ordinary buttered spuds, but instead a full meal with the potato as its canvass. The restaurant is due to open July 1, 2014 at 11am.

Interesting enough, Romano himself created the potato smasher, which you think an ordinary brick would suffice. Instead the smasher is a large hand-powered device that has a round center, and perfectly smashed the potato leaving no room for error. It is quite something to behold. 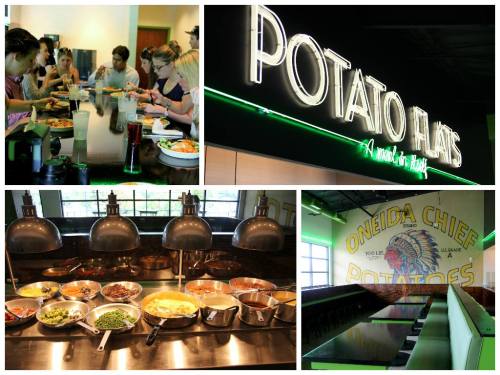 Think of Potato Flats as the next evolution of Chipotle, where you walk though a station with a large variety of hot and cold items to add to your spud. You may also choose from the menu.

Look for more to make their way to opening day very soon, including chocolate maven Kate Weiser. Also on the horizon in Trinity Groves is Of Site Kitchen, the best burger in Dallas from Jedi master restaurateur Nick Badovinus. Badovinus will also have a sandwich shop in Trinity Groves in the near future, as well as a “roasted meats” concept. Think muy rotisseries with an equal variety of meats. No name on this venture just yet.