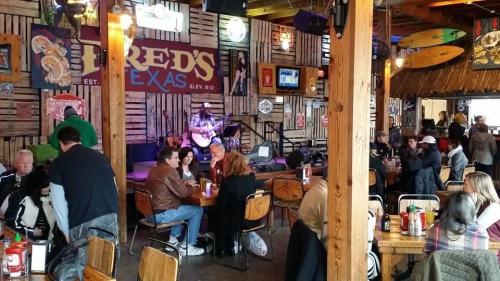 Call it Crockett Row, call it West 7th, call it what you will. With the constant changes around this area of Fort Worth it’s nice to find something that has remained pretty much the same for four decades. Fred’s Texas Cafe has been at the same location on Currie Street for 40 years.   Just a little holdout shack squeezed in among the glitz and noise of bars and restaurants geared towards the younger set, Fred’s caters to everyone. Young, old, city and country everyone comes to Fred’s for good food, good music and their “cold ass beer”.

Opened by the Chandler family in 1978 Terry Chandler took over in 2005 and over time has added his own flair to the menu. Chandler, also known as the Outlaw Chef, operates 3 Fred’s locations along with his chuck wagon catering featuring his “Ought Zero” original wagon.   He brings the whole set up and cooks on-site the way it was done on the trails in the days of the cattle drives.

Chandler and Fred’s have been featured on several television shows including “Diners, Drive-in’s and Dives” and “Bizarre Foods”. Chandler along with Chef Jon Bonnell spearheaded an effort to cook in Port Aransas for those affected by hurricane Harvey in 2017 while restaurants were struggling to get back up and running . 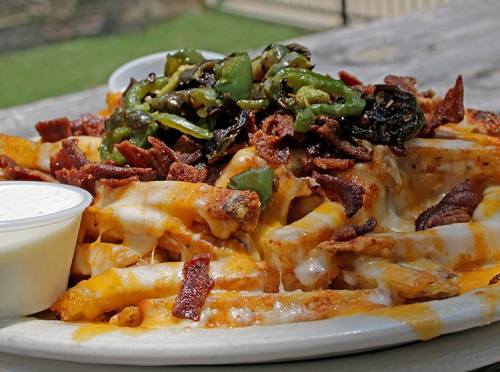 After a few minor renovations, new signage, barstools, etc., Fred’s is still chugging along and packing them in nightly.  You can find a wide variety of music passing through their patio stage. There is music every night and also during the day on weekends.  Get there early for some food and drink and snag yourself a table or barstool on the patio. The menu has what you would expect from a funky little place.  Great burgers, chicken fried steak 3 ways, loaded nachos, excellent onion rings, tacos and more. You get the gist. Fred’s is consistently rated one of the top, if not the top, burger in Fort Worth.

As with all places in the Crockett Row area, parking can be difficult.  There are a handful of spots out front that are free but those go quickly. There are a number of pay lots scattered around the area and meters if you can get one.  If you live in the area Uber or Lyft might be your best bet. Parking is not impossible just come with a little patience if you come in the evening. Don’t park in the structures labelled for Crocket Row businesses only or you may end up being towed. That’s quite the racket from what I have heard.

And yes, there really was a “Fred”.  He was the family dog.