While not to the extent of the poke craze, handroll bars are becoming quite the thing on the Dallas culinary world. Riding the wave of Namo and Nori Handroll Bar comes a third introduction, Sushi De Handroll, which recently opened at The Hill at Walnut Hill and 75. The restaurant is tucked away from the street, slightly hidden in the beautiful interior courtyard on the backside of Nazca and Snooze.

The space is brightly lit, especially before sunset when the sunlight can penetrate the large windows that face the courtyard. The eight-seat bar and six tables are built into and around the handroll bar, allowing the chef to deliver them immediately as they are finished to diners surrounding the bar.

Sushi De Handroll bills itself as a Japanese Temaki and Tempura Bar, so in addition to handrolls (tamaki) there are eight kinds of tempura, edamame, miso soup, salad, and a kid’s menu.

The stars of the show, however, are the handrolls. Each of the fourteen offerings are filled with warm seasoned rice and wrapped in crispy nori (seaweed) imported from Japan.

Along with the surf options of spicy tuna, salmon avocado, yellowtail, scallop, Toro, shrimp, and California roll fillings, diners can also choose from the turf menu of Chicken Teriyaki, Braised pork, Texas Akaushi beef, and a selection of vegetables.

The handrolls are served in two ways: one in the traditional style, fully wrapped in a roll-like circle and placed on a sheet of paper next to your table; or “taco style,” where the rolls are made open-faced and placed in taco tins, allowing for two to five to be served on the same plate.

Order al la carte, or select one of the Omakase line-ups, which include five unique rolls at a slightly reduced price. Surf and Turf, Ocean Handroll, Meat Lovers, and Hangry all come with edamame and miso soup and are priced in the twenty-dollar range. 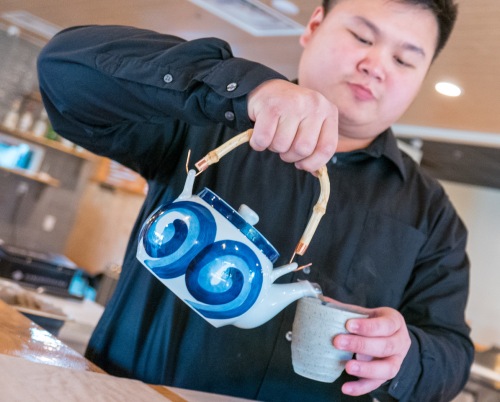 The Hill is fast becoming a prime culinary destination for residents of Lake Highlands and surrounding areas. There’s a line out the door every day at Snooze. Taco Deli is packed for breakfast and lunch. Nazca and Civil Pour have steady crowds as well as Bellagreen and Unleavened Fresh Kitchen. We hope this popularity carries over to Sushi De Handroll and the several new restaurants also opening soon at the Northeast corner of Central and Walnut Hill. 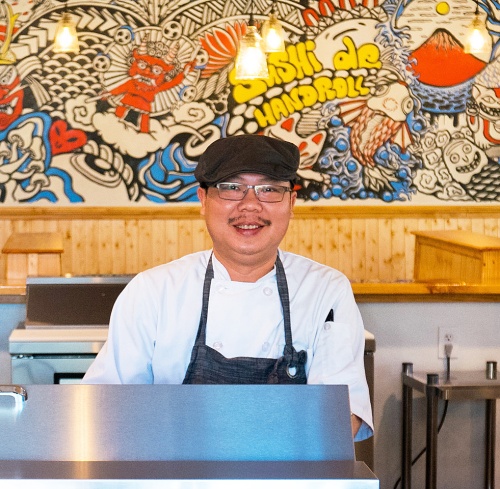