McCallister on the Lost Art of Foraging 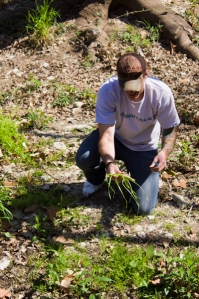 In preparing for the next edition of the Chefs for Farmers dinner this Sunday the 13th, chef Matt McCallister has been busy delivering meat, procuring produce and foraging for wild Spring onions and wood violets. Since when did foraging for wild roots and flowers become part of the chef’s duties? Apparently for quite some time and becoming more popular, taking the whole farm-to-table lifestyle one step further.

Before work and in the cool mist of the morning one of Melbourne’s top chefs Ben Shewry, owner of ﻿Attica, spends time foraging for exotic sounding weeds such as samphire (a wet, salty green he uses with crab dishes), pigface (used for their tiny but succulent fruit), or the lime-green sea lettuce called ulva. The chef scours the coast line for new shoots and interesting leaves to be used in the dishes he is making for the evening.

Many of these plants are good for their naturopathic abilities. Stinging nettles are becoming ever more commonplace, and has the ability to clean the liver and blood, prevent kidney stones as well as treat arthritis. Dandelions serve as a tonic for the liver and digestive system and relieve fluid retention.

A prominent local forager is Tom Spicer, owner of Spiceman’s FM 1410, who is known for plucking his bounty of mushrooms in the dampness of the morning to find bal 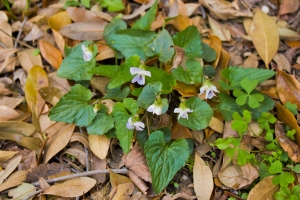 es of chanterelles and morels. As most who forage Spicer keeps his favorite locations a guarded secret, even going as far as blind-folding people who want to join in on the experience.

While on his most recent excursion McCallister also pointed out one of the favorites on the Lewis and Clark expedition was Lambs Quarter, a thick wild leaf that resembles spinach that can be eaten raw, steamed or cooked. 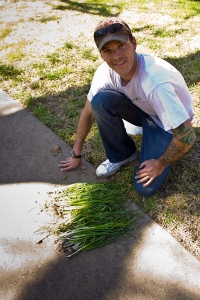 “There are individuals in the Dallas area that actually forage for these plants and sell them to restaurants. It would take maybe 30 minutes to hunt down what a restaurant might need for the day,” stated McCallister.

Today McCallister pulled enough onions and wood violets to take care of his friend chef Chad Houser at Parigi, who will also be at this weekend’s Chefs for Farmers dinner. Chad happily took the scallions and turned them into pesto and tossed the violets with a little blood orange vinegar. There will be 15 chefs in all, each taking their favorite old-school dishes and creating high-end cafeteria-style cuisine. The event takes place at the Highland Park Cafeteria in East Dallas.

2 responses to “McCallister on the Lost Art of Foraging”