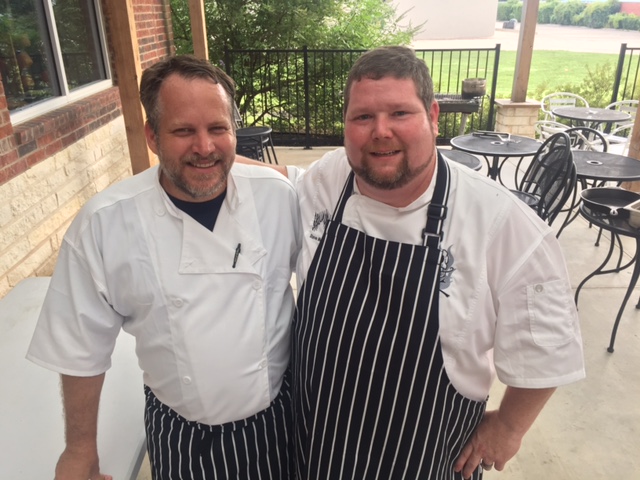 Making his debut as the Grilln Villain at a recent pop-up dinner at Nine Band Brewing Company in Allen, Chef Steve McHugh, along with Chef Graham Dodds, delivered a cleverly designed four-course, Texas inspired menu with product from sponsor 44 Farms. (You may recall we wrote on July 11th about Chef Dodds being named as the new Culinary Director of the Statler)

Chefs McHugh and Dodds partnered for the first time cooking with Chef Kent Rathbun at The Masters in Augusta, GA this year. Both men have a wry sense of humor and quickly found they worked simpatico even under less-than-perfect conditions, i.e., a field kitchen.

Nine Band has a fabulous tavern and bar, and a wonderful lattice covered patio in the back of the brewery, but it does not have a kitchen. Not a problem for Chef McHugh and Chef Dodds: they set up everything they needed on the back patio, including a huge charcoal grill to give the 44 Farms beef an à la minute smoke-kissed finish.

Kicking off the culinary festivities was a very special trio of deviled eggs, which you’ll soon be able to sample yourself at an as-yet-unnamed location around Dallas. The deviled egg trio consisted of versions with Franklin Barbeque brisket; chimichurri; and carrot with almond chermoula.  A lemon chive goat cheese stuffed Peppadew pepper rounded out the appetizers. The introductory beer was a Ghost Cow Oktoberfest, a full-bodied classic Märzenbier, available for a limited time at Nine Band. 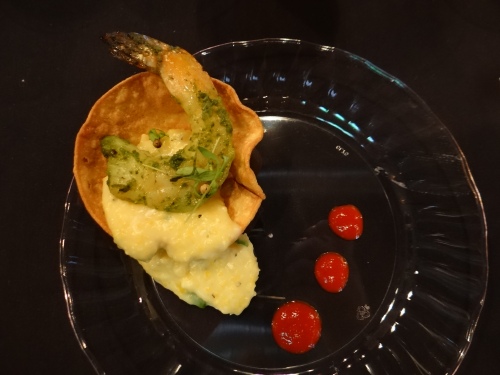 Our first course was cilantro grilled shrimp nested in a handmade, slightly sweet, corn tortilla vessel that contained a generous serving of pepper jack grits. Made with milk, cream and chicken stock in equal proportions, the creamy grits had a pleasing bit more texture and body. On the side was a brilliantly-hued red pepper coulis that added both a splash of color and a pop of heat.  Ice-cold Hoop Snake Hefeweizen accompanied our course – a perfect pairing to allow the flavors profiles to shine.

Next, we were dazzled by a clever take on a BLT. Two stems of tender gem lettuce nestled together on one side of the plate glistened with a bright, tangy Caesar dressing that Chef Dodd admitted “stealing” (his word) from The Grape restaurant 20 some-odd years ago. Handmade sourdough croutons gave a nice extra crunch.  Using four different sizes of heirloom tomatoes tossed in an herbed olive oil, the bed of yellow and red tomatoes provided delightfully different textures and shapes. The larger yellow heirlooms had the silky texture of papaya. Absolutely wonderful!  The plate was topped with a crisscross of 44 Farms beef belly bacon (say that three times fast!). 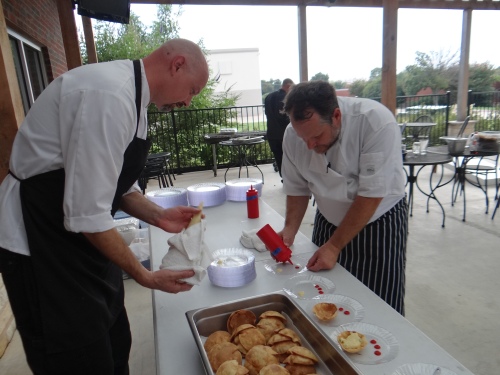 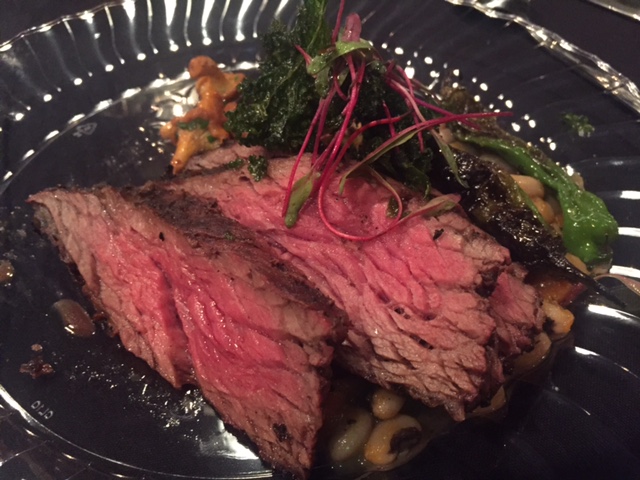 The bacon. Oh my, the bacon! This was no ordinary cook-some-strips-of-bacon for the salad: the bacon itself deserves an entire story.  A sponsor of these pop-up events, 44 Farms provided three beef bellies to Chef McHugh who enlisted the help of talented fellow Lover’s Seafood and Market Chef Aaron Staudenmaier to help expertly carve the bellies. These illustrious chefs spent a week curing the bacon with black pepper and brown sugar, then smoked them for eight hours over cherry and hickory wood. Not only was this salad a labor of love from the Chefs, guests obviously had a love affair with the flavors!  The Badge Honey Blonde provided just enough sweet to make this our favorite course.

An entrée of beef bavette kept the tastes and textures rolling. The bavette was marinated for two days in garlic, shallots, rosemary, thyme, black pepper and olive oil until the flavors really got to know each other. Sprinkled with steak house seasoning salt and flame-kissed on a charcoal grill, the bavette was deliciously rare and served over a bed of black eyed peas and chanterelle mushrooms with shishito peppers on the side. Served with a Hellwind IPA, the hoppy brew complimented the smokiness of the bavette well.

Dessert felt like being a kid again with a 28 State Stout semifreddo push-pop with a marshmallow cream halo on a caramel-drizzled plate with delicious toffee popcorn scattered about. The Toad Choker Barley Wine lent an interesting twist on this final course.

Chef collaborations are something you’ll be seeing increasingly more going forward and we’ll be telling you all about them. Chefs with no boundaries?  Absolutely can’t wait to see what’s coming next?  Look for more pop-up events like this one from RVC Promotions.