Tortas Guerrero For Antojitos And Much More

In the world of Mexican cuisine antojitos are a delicious style of street food. The word actually means “little cravings”, and can be found in small markets everywhere in Mexico. This would include tacos, tamales, elotes, tortas and tlayudas. The latter is probably the most unusual dish found, and is made with a crunchy tortillas base spread with beans, pork lard, cheese and any number of proteins such as chicken, or even crispy crickets (chapulines).

Anything hand held would definitely qualify as an antojito.

This week we checked into a “tortaria” in Dallas called Tortas Guerrero, which is located in the shopping center at Webb Chapel and Webb Chapel Extension, very near Love Field Airport. Here we found plenty of tortas which are enormous sandwiches made with a crusty white bread bun called bolillo.

The bread has a distinctive crescent shape and is often over stuffed with a myriad of ingredients, some that you might find in your typical taco, but also more traditional sandwich fillings such as ham. 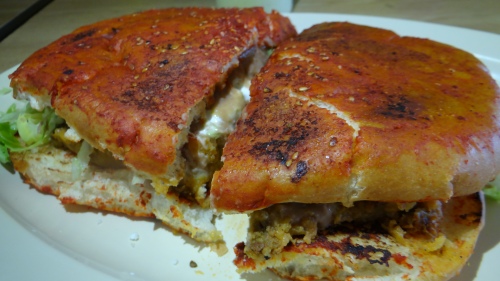 We were particularly excited to see another type of sandwich on the menu, the pambazo. This is a particularly interesting sandwich filled with potatoes and chorizo. The bread is similar to the bolillo, but a bit drier, and is actually soaked in a bright red guajillo pepper sauce for a bit of spiciness. It is then garnished with shredded lettuce, salsa, crema and queso fresco.

Guerrero does a wonderful rendition of the pambazo, and it is overstuffed to generous proportions. In addition, the tiny shop does a full breakfast, lunch and dinner plates, and interesting seafood items such as the Mexican seafood soup Campenchana, and a tostada de pulpo (octopus).