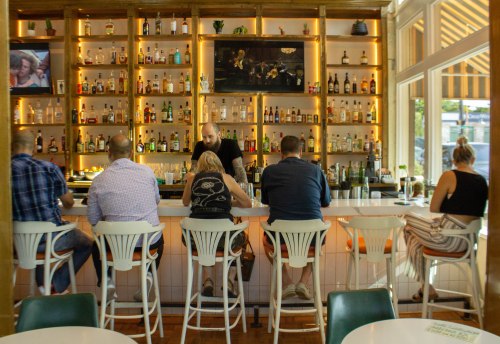 Oak Cliff’s Bishop Arts district is a cultural hub of food, art, and music. It is where local business owners have set up shop and have seen years and decades worth of success. What draws people to Bishop Arts are the unique concepts, including bike shops where you can watch live musical performances as you wait to get your bicycle fixed, yoga studios where you can align your chakras to the latest Travis Scott record, and bars with uniquely named cocktails.

Among the latter of these categories is Tiny Victories, which recently introduced a series of hip-hop themed cocktails. These cocktails include Back Dat Cass Up, Blu-Tang Clan, Grandmaster Razz, and Rumdog Millionaire.

The Back Dat Cass Up is the best of these four cocktails to start off with. It contains gin, lemon, ginger, cane sugar, and creme de cassis. It is a fizzy, bubbly, and fruity concoction that tastes almost like a traditional Moscow Mule. It’s almost like a boozed-up version of Ikea’s lingonberry soda. It goes down very easily and is very sweet and refreshing.

The Blu-Tang Clan is the best way to chase Dat Cass. Don’t let the name confuse you though, the Blu-Tang Clan isn’t for the children, and it most certainly ain’t nothing to mess with. The Blu-Tang Clan contains mezcal, butterfly pea curacao, agave, lime, grapefruit, egg white, and banane de bresil. It is blue in appearance, sort of resembling Listerine, however, this one probably contains more alcohol than the ADA would approve. As one drinks the cocktail, the liquid pours through a thick, frothy, foamy layer. It is nicely presented, goes down easily, and tastes somewhat like coconut.

If you’re looking for something with more Latin-influenced, your best bet is the Grandmaster Razz. The Grandmaster Razz contains tequila, cucumber, raspberry, jalapeño, lime, orange, Tajin, cane sugar, and Cointreau. Like the memories of a Hispanic adult showering their fruit with Tajin powder as a child, this cocktail is bittersweet. Those whose palettes cannot tolerate high levels of spice need not try the Grandmaster Razz. The cocktail itself is thick to the sip and goes down like a smoothie, however, the amounts of spice are enough to wake up one’s sinuses.

The Rumdog Millionaire is the best way to close things off, as this tiny cocktail is strong enough to keep one in a debaucherous state all night. This cocktail is an amalgamation of Agricole rum, smoked rum, Stiggins Fancy, creole shrubb, angostura, and nutmeg. It is the smallest in size of the cocktails but packs the most powerful punch. This demonic, cinnamon-flavored potion makes for the perfect antidote for the post-work week languor is is the perfect way to wrap up drinks at the bar before kicking off a night out on the town.