What Is An Amuse If Not to Make You Smile?

One of the most delightful things that may occur during dinner service might be the amuse-bouche, a relatively unknown feature of French culinary tradition that, once introduced, immediately became standard fare. Chefs at many fine restaurants offer guests an amuse-bouche, a bite-sized treat that excites the tongue and delights the eye, before the meal is served.  According to Jean-Georges Vongerichten, a popular New York celebrity chef with restaurants around the world, “The amuse-bouche is the best way for a great chef to express his or her big ideas in small bites”.

But the amuse is not necessarily for the fine dining set, if you will allow room here for free movement with the term. Anyone having visited a Korean restaurant may attest to this fact. In Korean restaurants it is almost certain you will be familiar with the word banchan. Banchan are set in the middle of the table to be shared and served in small portions, meant to be finished at each meal and are replenished during the meal if not enough. Usually, the more formal the meals are, the more banchan there will be.

Although not traditionally an amuse, the banchan are definitely an offering from the restaurant at no additional cost. The more banchan the more whimsical the meal may become. Perhaps I have over-extended the term, but walk with me.

Luncheon and banchan at Seoul Garden in Dallas

The items you might find as banchan might include a variety of kimchi, namul (which are steamed or stir fried morsels such as a par-boiled shepherd’s purse, stir-fried spinach seasoned with sesame oil, eggplant and much more).  Bokkem are stir-fried dishes with sauce. For example, pork in a chile paste, stir-fried baby octopus, or mushrooms. Jorim are tiny dishes simmered in broth like tofu with chopped garlic and chopped green onion. there are more such as noodle dishes and those lovely little pancakes made from scallions.

Banchan are simply amazing, and for those that enjoy Korean cuisine, the more banchan served the more the restaurant is favored. I can recall one particular lunch at Namoo where I ordered a $5 bowl of soup and was still plied with a very generous eight banchan.

Other types of cuisine that might serve as a stretch of an amuse might be Tex Mex cookery. Think about those bountiful baskets of fried corn chips serve along with a selection of bright and spicy salsas. And many times we find a hearty bowl of bean soup that is served before dining. Tiny cups of earthy beans that have been long simmered with pieces of pork, onions and chopped cilantro. The soup excites the appetite with anticipation of the meal to come, and expands the palate. Even if the meal is a simple tamale smothered in chili con carne, or a platter of cheesy enchiladas chockful of minced onion.

An amuse from a recent underground dinner at Frank Underground

An amuse in New Orleans should not be taken lightly. Consider chef Emanuel Loubier who had his tour of duty at the venerable Commander’s Palace.  Chef Loubier has been noted with unusual fare that may not be de rigueur among his peers, nonetheless has been known to serve such morsels as a cube of beet and chocolate cake resting in creamy buttermilk dressing, and topped with onion jam and a sliver of chive. Oddly enough, this works amazingly well.

Then think of the restaurants which are entirely made of an amuse, or chef’s tastings not too unlike Anthony Martin’s Tru in Chicago (now closed) which offered caviar service and almost entirely a ration of prix fixe tastings. This is the beautiful food displayed as works of art which not only play on your eyes but your palate. Think of wondrous dishes such as sunchoke velouté, toasted hazelnut, crisp parmesan, or a veal sweetbread, caramelized Belgium endive and d’anjou pear. The thought of this sort of dining makes me quiver with delight as it allows for more flavors and textures to be presented to the dining experience.

Locally, a visit to Fearing’s at the Ritz-Carlton netted an amuse of Thai Coconut Melon Soup with Crystallized Ginger. On another visit we enjoyed an amuse of a coconut shooter that was heavenly in its brilliance.

We enjoyed the morsels that are the amuse-bouche at The French Room, as you might imagine. One occasion a  lobster salad with chanterelles, another, lobster in a cream sauce. All simply meant to rev your culinary engines before you take down portions of foie gras, crab cakes, Dover sole and chocolate souffles. Immensely flavorful, but all beginning with a single bite. 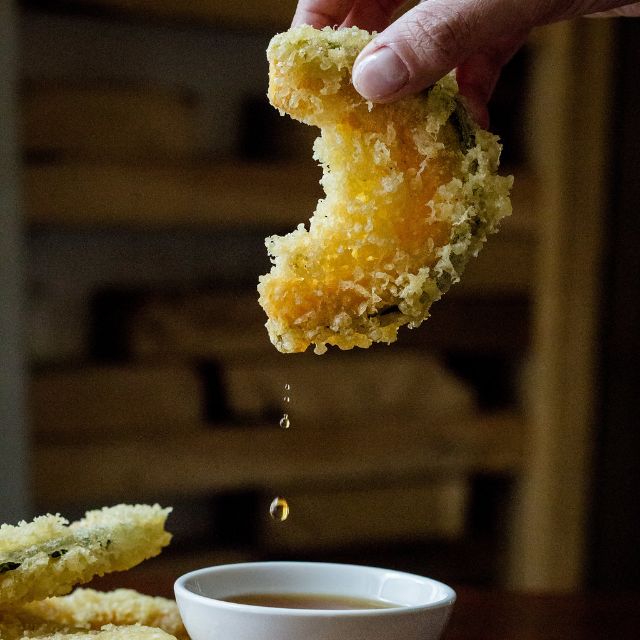 The sushi sensation, Uchi, is beyond the wafer thin mint treatment when it comes to an amuse. Table waits can often be the norm at Uchi but they ply their guests with passed bits of sushi, and on one particular visit, a cup of sake. There is simply nothing wrong with any of this, and actually will make your dinner mates giggle with anticipation.

A pleasant memory of an amuse past was from Charlie Palmer’s at the Hotel Joule when chef Scott Romano dispensed thumb-sized lobster corn dogs as an homage to a cheffing gig at the State Fair of Texas when he first started working at the restaurant as executive. Romano once told me that he dared not to remove the corn dog as it had become something of legend at the restaurant with guests. We have since seen this amuse elsewhere which evokes fond remembrances of dinners ago.

Enjoy your amuse, consider it a gift from your chef. But remember, anything may be an amuse if it is unexpected and makes you smile. And let us know of your favorite amuse that you might have had.

Below we have the recipe for Herrera’s bean soup, which we certainly consider one of the finest amuse bouches in town. Well, those niblets of lobster at the French Room compete mightily.

Rinse beans. Place in a saucepan and cover with water. Bring to a boil. Turn off heat and let beans soak overnight or for several hours. Drain.

In a large skillet, fry bacon until crisp. Drain on paper towels. Add green pepper, onions, cilantro, jalapeño and garlic to bacon drippings. (There was no “garlic” listed in ingredients so…wing it!) Sauté until tender. Add to beans, along with crumbled bacon and water or broth. Cook until beans are tender.