In the past weeks leading up to Christmas we have been visiting various tamale makers in the Dallas area including La Popular and Abraham Salum at Komali where we got a primer in the art of tamales. This week we visited a very special woman who lives in the Oak Cliff area very near her son, co-owner of Coevál Studio and the new restaurant Campo Modern Country Bistro, John Paul Valverde.

We had asked John Paul if he had any leads on a good tamale maker and he sat back for a moment then smiled, “my mother makes the best tamales.”

A few days later John Paul called and said that he had arranged everything and we were welcome to visit his mother, Alta Valverde. As we stopped by Mrs. Valverde’s home, John Paul was waiting for us at the door and we were greeted by his sister and three nieces who were home from school for the holidays. 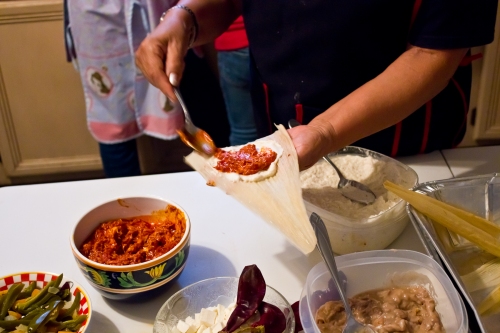 Lining the kitchen table were all the components for making tamales including the masa, and bowls of a variety of ingredients that would fill the tamales like queso fresco, frijoles, rajas, and a shredded chicken with a chile rojo.

“I started making tamales when I was a little girl living in Acatlán Hidalgo about an hour from Mexico City. When I was ten I would help my mother by cleaning the tamale leaves,” said Mrs. Valverde as she swiped a bit of masa.

Across the kitchen one of her grand daughters who appeared about ten herself was separating the hojas, and pulling apart the loose strands of fiber from the dried husks of corn.

There is a secret trick to making the masa. “You add a bit of anise and the husks from a tomatillo to the water that you use with the masa,” said Valverde as she busily made even more tamales.

John Paul gets involved with the tamale making, “If I am not here my older brother will come and help my mother turn the masa and then go to work. She will make the tamales all day and by the time we come over on Christmas Eve she will have the tamales ready with a home-made fruit punch.”

There are traditions that go with the tamales. And although she wasn’t quite sure why tamales are the standard holiday treat she did offer, “In Mexico is was a tradition to have a pinata on Chrsitmas Eve and serve tamales. One tradition is to serve the tamale inside a bolillo, which is like a French loaf bread. You would have the tamales served with coffee.” 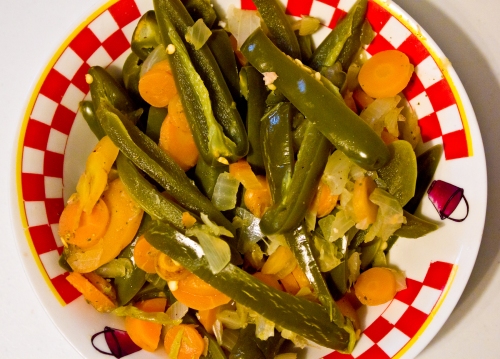 Tasting the tamales we noticed they were lighter and more moist than most tamales we have ever tried. One reason why is because Valverde does not use manteca, or lard. She instead uses a lighter vegetable oil. The slight flavor of anise and the tomatillo did make the tamale brighter, and the chile sauce used in the chicken mix brought a small tear to your eye. The spiciness was perfect and made for a well balanced tamale.

Although she was not making them this day, Valverde also has a mole version of her tamales. She also makes a dessert-style tamale with chocolate and raisins for special occasions. 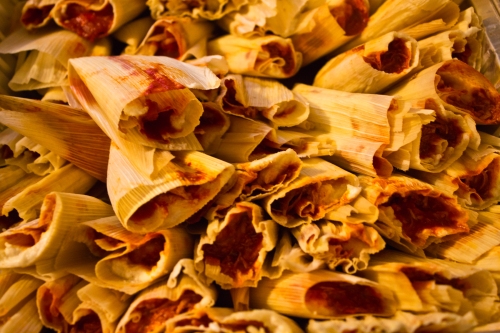 Mrs. Valverde doesn’t make the tamales to sell, but still makes 500 of them for the holidays. These are for the Christmas dinner and to send home with all her children. This year she did agree to make some extra to share with the craveDFW readers and John Paul set up a special email address for orders. Drop a note to dallastamales@gmail.com to place your order today and she will give you a quote.

Thank you John Paul Valverde for sharing your family’s traditions and your mother’s hospitality for a few a hours.

6 responses to “Home-Made Tamales for Christmas”