Santa Rosa For A Pupusa And Plantain Fix

Sometimes you need to satisfy your inner-Salvadoran by checking out on of the few restaurants in Dallas that serve the South American cuisine. This week we went to Santa Rosa on Walnut Hill, next to one of our favorite dive bars, A Step Up Lounge.

Santa Rosa is a fairly large restaurant in a decaying North Dallas strip center, and they serve mainly Salvadoran food with a few exceptions of fajitas and several Tex Mex items to appease the gringos. This means you will find pupusas, fried plantain, banana leaf wrapped chicken tamales and the best black beans in the area.      END_OF_DOCUMENT_TOKEN_TO_BE_REPLACED

The History of Tamales

Tamales can be traced back to as early as 7000 B.C. in Pre-Columbian history, when the Aztec women were taken along in battle as cooks for the army. There was a need to have a more portable yet sustainable food and the tamales could be made ahead of time, packed and warmed as needed.

Originally, the tamales were cooked by burying them in hot ashes, which made them crispy and brown. However, as time progressed, the Aztecs began to implement new methods for cooking, learned from the Spanish conquistadors. At which point, steaming the tamales in underground pits or in uncovered pots became the practice. When steaming the tamales, the Aztecs believed that the tamal sticking to the bottom of the pot was a sign of good luck, and would protect them of the dangers on the battleground.   END_OF_DOCUMENT_TOKEN_TO_BE_REPLACED

Tagged as Christmas, Food of the Gods, Tamalada, Tamales

Tamales at La Popular Feed the Community (And They Want To Give You 10 Dozen Free!)

Today we visit with the absolute giants in the tamale industry, La Popular. The Tamale House has gained a reputation for not only making quality tamales year round, but also takes pride in giving back to the community as we will find out with this Q&A with both Jesse Moreno Sr. and Jr. at La Popular.

La Popular is one of the most respected tamale makers in Dallas and for a good reason. The tamale continually makes the top of any best tamale list since they opened in 1984. There are currently two locations for La Popular, one in the Lakewood area and the other in Shed #1 at the Dallas Farmers Market. You ma pick up fresh, hot tamales for the holidays at either location, even on Christmas Eve and New Years Eve.

Jump to join the conversation with the Moreno family.   END_OF_DOCUMENT_TOKEN_TO_BE_REPLACED

Win This: Tamales From Urban Taco

Urban Taco loves to make tamales and as we previously reported they have a new version for the twelve days of Christmas.

This special menu of daily changing seasonal hand-made tamales is available December 13-24, 2012.  Guests can order the daily selection during lunch or dinner as a tamale trio plate with black beans and roasted corn con crema for $9.75.  In addition to enjoying the tamales at the restaurant, place an order for any variety of tamale to go with 24-hours’ notice, with a minimum order of one dozen for $24.   END_OF_DOCUMENT_TOKEN_TO_BE_REPLACED 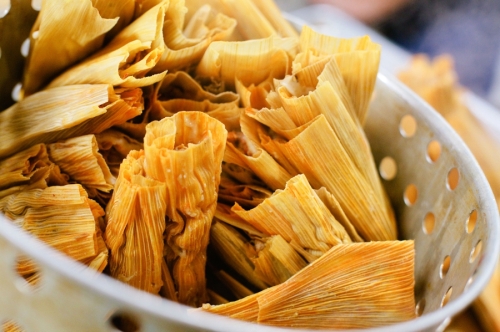 La Popular Tamale House located in the Lakewood area and also in Shed 2 at the Dallas Farmers Market has long been praised on craveDFW as one of the best tamales in Dallas. The family owned business opened in 1984 and has been a valued part of the community since. The restaurant is operated by the father and son tag team Jesse Sr. and Jesse Jr. Moreno who both spend time making tamales and giving back to the community through their valued contributions to the city.       END_OF_DOCUMENT_TOKEN_TO_BE_REPLACED

You know each year we love on the almighty tamale and 2012 will certainly be no different. Please be sure to send us your favorites so we might taste and report on all of the very best tamales this year.

The first strike this tamale season is from Urban Taco who each year makes a delicious new tamale daily leading up to Christmas in what they call the Twelve Days of Tamales. We have the list of the dozen they have scheduled for this year and think you will agree it may very well be worth a daily visit.     END_OF_DOCUMENT_TOKEN_TO_BE_REPLACED