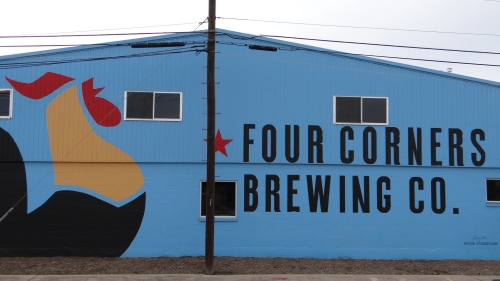 Another brewery has officially gone online in the Dallas area, this time from the Trinity Grove sec0tion of West Dallas which can be found just across the Margaret Hunt Hill Bridge at 423 Singleton. The brewery will be strictly sold in brew pubs and kegged, but later will adopt another system which they anticipate as an aluminum bottle. Common Table cracked the first keg of Four Corners earlier this week, and a debut party was hosted at Good Friend last night.

We had a chance to speak to a pair of the owners; there are four members of this team in all thus the Four Corners. Here is a conversation with George Esquivel and brew master John Sims.

Tell us how you first started with the brewery.

George Esquivel A couple of us started out as home brewers for the past four or five years, and we met at competitions such as Brew Riot in Oak Cliff. That’s when we collaborated to put together a business plan for Four Corners.

What was your first foray into brewing?

John Sims I started at Yegua Creek Brewing over on Henderson in 1993. I helped them get that place up and running then I moved over to Copper Tank in Deep Ellum 1995. I worked there through 2001and that was my start about 20 years ago. 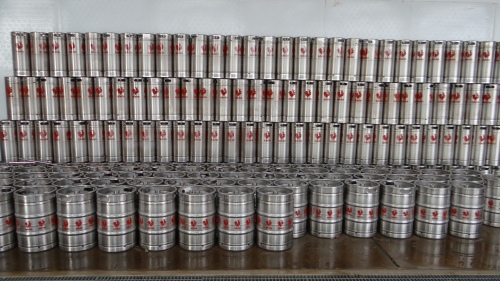 Exactly how did the four of you meet?

Sims I did an improbable search on the internet for breweries in Oak Cliff. I like over there and there are no breweries to speak of in Oak Cliff. I did find out that Matt Spiller who owns Eno’s mentioned in a press blurb that he thought it was time to have a brewery in Oak Cliff. I made an appointment to meet with Matt, and he knew George, Greg [Leftwich] and Steve [Porcari] and knew that they had been working on a project for a while. That’s how we all got together.

When did you start working on Four Corners?

Esquival It’s been a process of getting that business plan together. We raised our own capital through our friends and family network. From there it was actually down to ordering the equipment. When we first launched into this project equipment orders were 2 or 3 months range outstanding. By the time we ordered it was pushing 6 months

This space at 423 Singleton was a big rig shop and was pretty grimy. We had to do a lot of work just to get it where it is today. We literally had to resurface everything inside and out including the parking lot. We are fortunate to have the space we have, and as much of it. We are poised for growth and get out to market.

Tell us about the first beers we can expect.

Sims The first beer is called Local Buzz. It is a honey and rye golden ale. It is faily light and not too bitter. It has a great aroma of local honey in it. Our second beer is called Red’s Road  Hot. It is an American red ale, with lots of caramel malt and Pacific Northwest hops, and we will follow that up with an English brown. We also have an American Pale Ale that I brewed yesterday that should be ready in 3 weeks. We will also have a robust porter which we will brew in a couple of weeks and it will be ready in a few months.

We will be doing some seasonal beers. I am not going to say what those are at the moment. Bu they are coming.

I see a lot of kegs here.

Sims There are several hundred kegs, many of them are filled and in the cold room ready to go out.

Where will we find Four Corners on tap?

Esquival We have already tapped at Common Table and Good Friend, and we will be found throughout Oak Cliff immediately. You can find us at Ten Bells Tavern, Eno’s, Nova, Lockhart, PhD and the Texas Theater. We want to saturate Oak Cliff. We are Oak Cliff’s brewery. But Dallas is really our neighborhood, but we have a fondness for Oak Cliff.