Seven Chefs and a Winemaker Dinner At Culpepper’s

It is always inspiring to catch one of the many wine dinners at Rockwall’s Culpepper Steakhouse. Chef Chad Bowden sincerely goes to great lengths to find interesting winemakers to make the trek to Dallas, and then drive another 20 minutes east to Rockwall to host a fantastic evening celebrating wine and food.

This past week was another shining example when Bowden invited a few of his cheffy friends over to play, including Eric Black from Tony C’s, Randall Copeland from Ava, Ted grieb from the Fatted Calf, Pete Harrison from Dakota’s, and Dan Landsberg from ZaZa’s Dragonfly. I always enjoy watching a gaggle of chefs collaborate in the kitchen. You hear some fantastic war stories, some which cannot be repeated, and you hear plenty of laughter. There is a sense of synergism watching them assist with each other’s plating. There is also a healthy dose of unwritten competition. 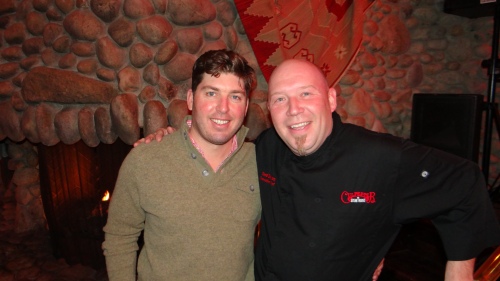 Orin Swift’s owner, David Swift Phinney, was on hand and had just flown in from Paris to make the historic dinner. Historic because you will never see Phinney host a dinner, but he made an exception for this particular evening which sold out in record time.

The Orin Swift wine is relished by wine enthusiasts as one of the finest makers, and they bring in the best juice from renowned wine countries such as France, Spain, Italy, Corsica, and Argentina.  The excitement grew as guests were able to view the menu that included some of the very best Orin Swift wines from around the globe.

What transpired next was genius. Allow me to share the menu. 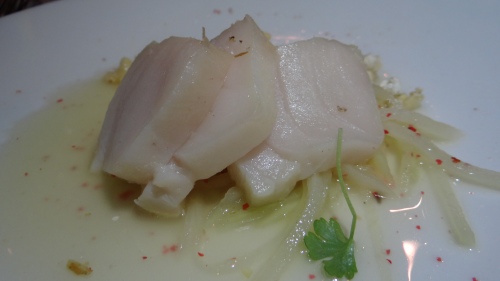 You may know Eric Black who was a chef at Crú and now is at Tony C’s in Austin. Black started the dinner with his roasted pineapple brined escolar served with a green papaya salad and gingered popcorn. Black’s dish was paired with a 2010 Mannequin which is a California white. The wine sparked beautifully with the flavorful dish. 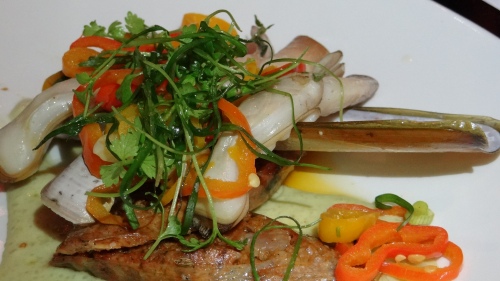 Next, Randall Copeland served an amazing pairing of razor clams and beautiful house-made fennel and paprika sausage. We sipped Locations by Dave Phinney E1 which is a Spanish proprietary red. Our table applauded both the wine and dish.

Ted Grieb stepped up to the table next with his Wagyu Squared which was mesquite grilled Korean short ribs and a New York strip steak served up with a kimchee slaw and a fricassee of mushrooms. This dish was paired with Locations by Dave Phinney F1, a French proprietary red. 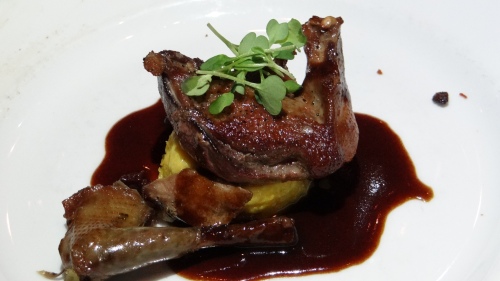 Dakota’s Pete Harrison was at bat next with his amazing squab duo which was a seared breast and a thigh confit, served up with a root veggie flan. Phinney offered his 2010 Saldo which is a California Zin.

The house chef Bowden made a delicious red wine braised chicken served with a mushroom puree and a natural julee. We enjoyed a California red, 2011 Abstract, with this dish. 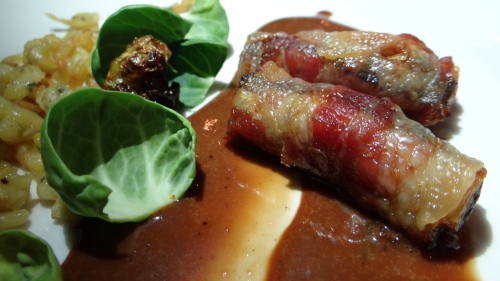 Landsberg served his version of Three Little Pigs which was a pancetta wrapped and milk braised shoulder and roasted belly with a foie and blackberry demi. Also on the plate was a flavor-infused sage spaetzle and crisped Brussels leaves. The 2009 Papillon from Napa was probably one of my favorite wines of the evening. Or was it the F1? 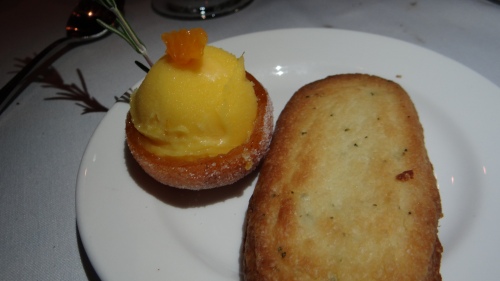 Culpepper’s pastry chef Rachel Jeske always offers something fun to round out an evening and that night was no exception. We enjoyed the honey tangerine sorbet served in a candied tangerine bowl with a side of rosemary shortbread. A delicious 2010 D66 was paired. This is a fantastic Cotes Catalones Grenache. 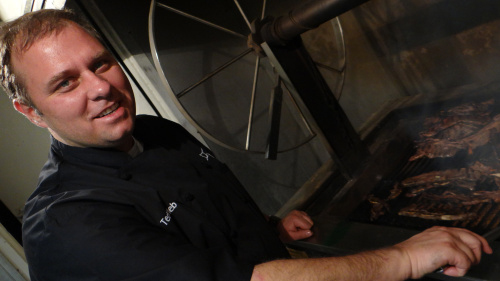 The dinner was a fun and lingering evening which the chefs completely amazed us all. I am looking forward to the next wine dinner at Culpepper’s. We will keep you all up to date on the next event.