Trinity Groves is shaping up to be the new restaurant Mecca that it had agreed to be more than a year ago. Weeks ago Kitchen LTO popped open its doors to a sound crowd and early reviews, and yesterday round one chef Norman Grimm served his first lunch crowd. Meanwhile, Souk has had better than expected covers for their dinner service which started last Thursday. The next restaurant to open for business is LUCK, or the Local Urban Craft Kitchen which is very beer focused. We snagged a first look at LUCK last evening during a mock service.

While LUCK is not quite ready for service until Wednesday evening, they are quickly making those few last minute adjustments. As for the food, very little needed adjustment and the service flowed smoothly.  After walking the long road to opening day, LUCK is eager to serve you some interesting food that pairs extremely well with a choice of more than 40 local brews on tap, several choice wines and kambucha for constructing beer cocktails. LUCK is the brain-child of partners Jeff Dietzman, Daniel Pittman and Ned Steel, with Pittman acting as chef even though the three-some are all trained for the job.

It is Pittman that came up with a few interesting menu items such as the bierock ($10). For those unfamiliar, a bierock has actually nothing to do with beer, but instead is a pastry that resembles a dinner roll filled with beef and cabbage. The last bierock I enjoyed was at the hands of an Amish woman who made the glorious hand held sandwich with joy. This version is served with a side of beer cheese fondue and an au jus, but they are perfectly delicious solo.

Other items from the sharable plates side of the menu includes a tortilla encrusted shrimp ($12) and whole smoked chicken wings that are finished off on the grill ($10).

The vegetarian in you will be more than satisfied with the big salads that are hearty and flavor packed. Enjoy the grilled romaine and roasted jalapeno salad that is laced with buttermilk dressing, chile dusted croutons, heirloom tomatoes, pickled onions, queso fresco and pepitas. There are more than several of these well constructed salads to select from and bargain priced at $9.

There are a handful of sandwiches to select from, but a few stand outs outs include the lengua, the  Texas hot brown, and a house smoked pastrami. All the sandwich are generously stuffed and plied on some terrific local breads. Each sell for $9 each, giving way to the thread that LUCK is not an expensive restaurant in the least.

The entree items are equally as generous and priced so that you will want to make a return visit often. The pork schnitzel is platter-sized and is served with herbed spaetzel, braised red cabbage and a brown butter ale sauce. LUCK’s smoked chicken is a half bird served with chipotle potato salad and an apple cider Cole slaw. Massive in size and flavor. The pot roast is a giant brick of beef that has been given the LUCK treatment, tender and succulent. All entrees are priced at $16. 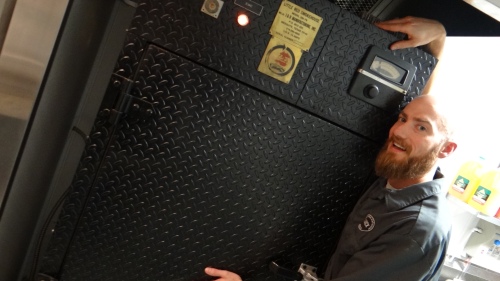 Having sampled LUCK’s desserts at several of their pop-up dinners  this past summer, as well as their Fork Fight venture, I can attest that the boys make an insane ice cream. Whatever they put the ice cream on, order it. The chocolate porter brownie is a good place to start. Also look for the beer battered apple fritter funnel cake to ease your spirits.

It is good to see Trinity Groves progressing so well. Dallas could use this easy to access area in West Dallas just across the Hunt-Hill Bridge. Look for LUCK to open wide this Wednesday, with Casa Rubia gearing up for the first week in November.

Tagged as Local Urban Craft Kitchen, Luck, Opening, Restaurant, Trinity Groves, What to do in Dallas