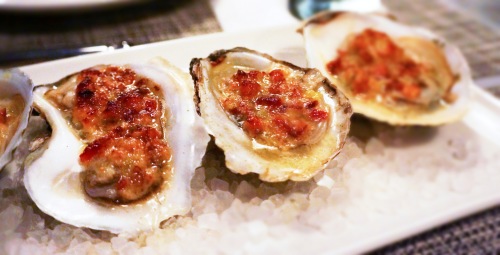 Husband and wife restaurant duo, Allison Yoder and Stephen Rogers opened Gemma on Henderson Avenue December 26th in 2013, nearly one month ago today. The couple were warned of the location in a strip center where many restaurants had failed in the past due to high rents, but the property had been taken over by a new management team that felt that the fresh menu and cozy digs were ideal for that tract of Henderson which is soon to be taking on a new life of its own with many new additions in coming months. 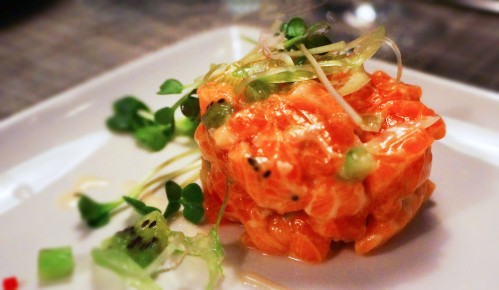 Located at 2323 Henderson Avenue, Gemma offers a fresh and modern American seasonal menu with ethnic influences in a quaint setting that was actually designed by the owners who were attempting to adhere to a strict budget. The results are charming. As charming as the new restaurateurs themselves. Even more to their credit are the staff of seasoned professionals gathered from around the city such as former Spoon sommelier, Sabrina Snodderley, and pastry chef, Stephanie Childress, who was acting as GM and pastry at Battuto.

Childress has a storied CV that starts as a graduate of the Culinary Institute in Hyde Park, Pastry Sous Chef for Mario Batali’s B&B, Enoteca and Otto. She also performed as Pastry Chef Tournant for the Michelin Star, Forbes Four Star-rated Bradley Ogden in Las Vegas.

With the wonderful staff choices and beautifully up-ticked surroundings, Gemma is enlightened by the culinary talents of co-owner Stephen Rogers who was formerly executive chef in Napa at a the highly lauded restaurant, PRESS. Rogers is backed in the kitchen by local chef Richard Graff who holds the Gemma Executive Sous position. You may know him from George, Craft and most recently Cook Hall, which occupies the former Craft location in the W Hotel.

Yoder is working the front of the house as General Manager. She was also formerly with Rogers at PRESS in Napa in the same position and has the sea legs necessary to operate a restaurant as evidenced by her guarded motions throughout the floor in the 50 seat restaurant (85 if you count the patio). She conducts her staff with grace and quickly snaps into position where needed; a talent that is earned through confident intuition.

The cuisine at Gemma takes inspiration from Asian, Italian, Mediterranean, French cultures. Rogers said, “I want to showcase the ingredients of my recipes and deliver a product that our guests will crave.”  Crave. Indeed.

With several visits behind us we enjoyed every aspect of our meals that was supplemented by a strong Napa wine list, with nods to Old World favorites.  Selections from the raw menu include a sampling of interesting oysters. Recently we enjoyed the 1871 oysters from Virginia which have a clean brininess due to the eel grass and plankton they dine on. They have a big flavor matched with a minimum 3 inch long requirement that make the oyster a meaty joy. Chef pairs the oysters with a savory gratina that is ever-so-slightly kissed with jalapeno and add a beautifully spiced chill to the oyster selections.

All of the appetizers are a must, even if not on the first visit.  What a beautiful way to start a meal that with Gemma’s roasted baby artichokes served with wild arugula and a poached egg. It is nearly too beholding to eat. The crispy veal sweetbreads are served with a whole grain mustard atop a mess of frisee. These are as haunting as the mussels that swim in the shallow end of a coconut lemongrass broth. 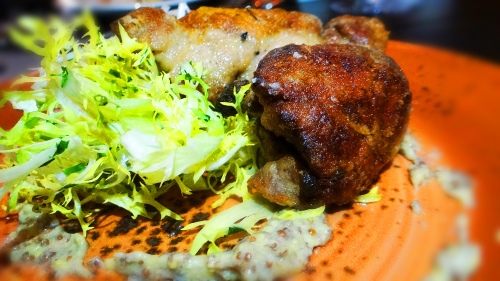 The pastas are all made in house, as they should be. Particularly wonderful is the pappardelle with lamb shoulder and king trumpets. What a perfect way to soak up the chill of a wintry evening. We also enjoyed the duck served two ways; confit and perfectly seared breast perched on a swath of barley “fried rice’ and pickled daikon.

There are several seafood selections and a duo of beef choices. We had both the arctic char with mustard greens, cranberries and pecans with a swill of red wine jus, and the grilled striped bass served with a smattering of kohlrabi (rarely seen on Dallas menus), fennel, baby artichokes and Nicoise olives. Both fish selections were superior plates.

The king of all orders had to be the braised veal cheeks that had mounds of fresh spatzle, cippolini onions and root veggies. A perfect winter dish packed with flavor. 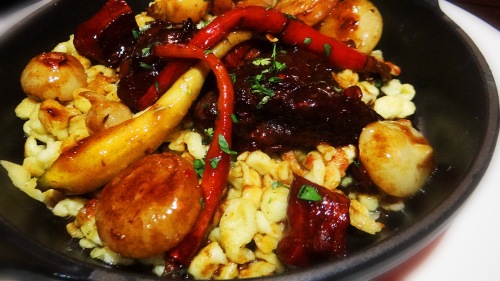 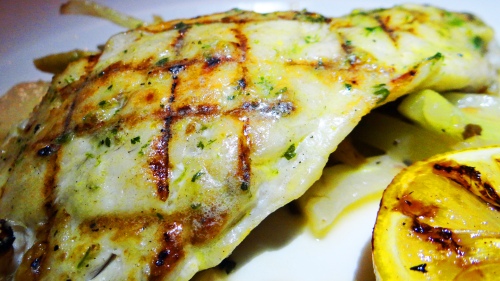 More than likely you will be exhausted as we were from the flurry of plates. Everything demanded to be ordered, and we did. But with the addition of a tiny cup of espresso we were coaxed into savoring the tiny Basque cake which was infiltrated with a bit of Meyer lemon cream, and served with a quinelle of frozen citrus souffle. The plate is a precious love song strummed by pastry chef Childress who uses shortbread as her canvass to seduce her patrons. Lovely.

For the late night crowd, which may certainly include theater-goers and industry folks alike, Gemma has a condensed menu that goes on into the night. Dine here until 1am. They even offer an industry special at a very palatable price.

People who enjoy a clean, fresh menu will enjoy Gemma and all she has to offer.

7 responses to “Gemma, The New Enchantress Of Henderson Avenue”