While The Statler in downtown Dallas has seen many unfortunate closures with its restaurants in recent months, Fine China still stands. The age-old adage holds that if something ain’t broke, don’t fix it, and while Fine China was already a hit as it was, chef Ryan Carbery (Farmbyrd, Tillman’s) and crew decided to revamp the menu to encompass various Asian cultures.

One of the new cocktails includes the far east, which is Fine China’s take on the French 76. The far east contains Ketel One botanical orange and peach, lemon, sparkling sake and grapefruit bitters. The cocktail glass comes garnished with an edible piece of paper with Asian art on it.

For main dishes, Fine China’s menu has been updated to include traditional far like orange chicken, braised short rib and mongolian beef. The mongolian beef is the highlight of Fine China’s renewed menu. It consists of a wagyu flank and is bursting with spicy ginger and chili, 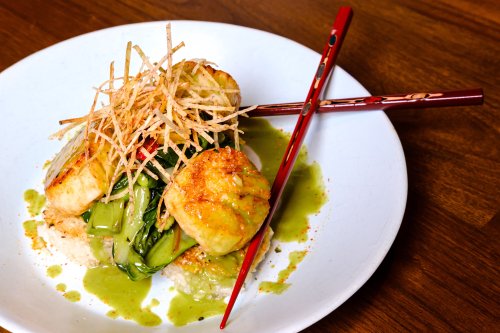 Lighter options include sushi, which comes in the form of several traditional favorites.

For dessert, the kaffir lime cheesecake is absolutely to die for. It consists of toasted meringue, mango sauce and ginger streusel.

While those who have previously dined at Fine China may notice that some of their favorites, including the dan dan noodles, are gone, the new menu certainly merits a try. Fine China’s approach toward a pan-Asian concept should prove successful, and will hopefully be enough to keep them standing for years to come.

Tagged as Dallas, Fine China, New Menu, Statler, Where to Dine in Dallas