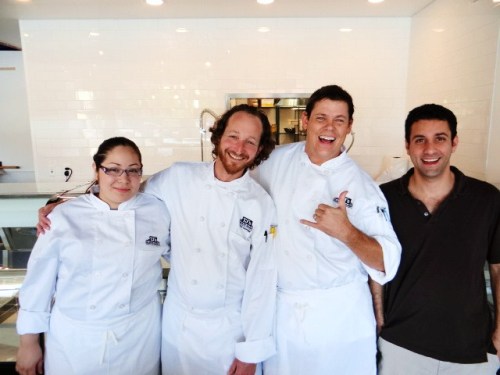 We stopped in TJ’s Seafood Market’s newest venture located on Oak Lawn next to Julian Barsotti’s Carbone’s and just feet away from Nosh. TJ’s is owned by Jon and Natlie Alexis and together they have been planning this new concept for the past three years. They will not only have great seafood with an even larger selection than their original store located on Preston at Forest Lane in North Dallas, but will also feature a 24-seat restaurant.

Alexis says he does not want to be in the restaurant business, but rather offer fresh selections culled from the new seafood cases and will be offering chef-driven menu items that will include fish tacos, lobster rolls and full plated meals. To execute the restaurant portion of the market Alexis hired chef Scott Hoffner who ws most recently executive chef at Flippin’ Out Crepes.

Hoffner is a Johnson and Wales graduate and has worked in top steak and seafood restaurant and was also the personal chef to Tyson Chandler. Hofner will act as general mnager and executive chef for the new location.

Alexis also hired another chef to run the front of the house, Andrew Kelly. Kelly managed all the sushi operations for all the Texas Central Market’s and has a particular expertise in this area. The chef will assist customers with their seafood purchases and even instruct them how to cook their own dishes, offer recipes and go as far as to teach the public how to roll their own sushi.

Rounding out the cast working at the new TJ’s is Janet Montiel who has been with TJ’s for the past three years after she graduated from the Dallas Cordon Bleu.  Her expertise is prepping whole fish and customer service.

The market will seat 24 people comfortably and was actually designed and appointed by Natalie Alexis.

“We didn’t want a cartoonish Captain Willy’s look to the market, but rather a comfortable beach feel like you might find in Martha’s Vineyard,” said Jon Alexis in our walk through yesterday afternoon.

The association between Carbone’s and TJ’s will not just be neighborly, but rather the two stores will engage the public together.

“There’s a lot of synergy here. Jon is a great guy, I’ve gotten to know him over the past few months.  He does an excellent job in sourcing fish and is incredibly proactive.  Doing classes together is a great way to communicate our passion for handmade Italian food. Seafood and Italian go so well together,” said Carbone’s chef and owner Julian Barsotti.

Look for the new TJ’s market to open the first week in October 2012.