You know it is time to celebrate Mardi Gras when the Kings of Gumbo show up with their finest as they did last Sunday at Poor David’s Pub for the 13th Annual KNON Gumbo Competition. Sunday was the beginning of the cold snap, but a celebrated crowd of folks showed up, spoon in hand, for a taste of New Orleans.

The event was coordinated by David Pippin who has a pulse on the chefs in Dallas. You might recognize him as the chief behind the State Fair’s chef demonstrations.    END_OF_DOCUMENT_TOKEN_TO_BE_REPLACED 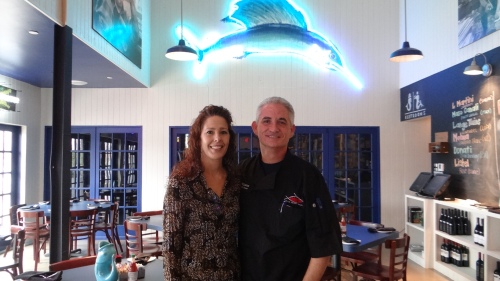 Tis the season to open a restaurant in Trinity Groves. If you have not checked out the growing number of restaurants that have recently opened in Trinity Groves, you are missing out on a new treasure in Dallas. The most recent to join that list of openings is Amberjax. Located on the northside of the main building, Amberjax is both a seafood market and restaurant combined into one. Amberjax is owned and operated by Larry Williams and Karen Simmons-Williams. Larry was formerly running the kitchen at Rex’s Seafood Market, and jumped ship to open his own restaurant. Originally he planned to stake claim directly across the street from Rex’s, but that plan was scrubbed and he partnered with Phil Romano and Trinity Groves.

The restaurant opened this past Saturday to a large reception. The room is long and airy with a genteel southern feel. The interior is bright and inviting, and not overly pretentious much like Larry himself. Amberjax is no doubt occupies the largest space in Trinity Groves so far (sans 3015 the cheffy entertainment venue across the parking lot), and also has the largest and most interesting kitchen which is decked out with every appliance known to chefs.    END_OF_DOCUMENT_TOKEN_TO_BE_REPLACED