You can always tell the change of seasons, not by the weather conditions, but instead by the many menu updates at the better restaurants. Chefs will adjust their menus to reflect the availability of ingredients and this is always a time to celebrate. Like the season itself, chef Tre Wilcox sprung into action to breath new life into the luncheon menu at his restaurant, Marquee Grill.

Now absent are some of the fried victuals that could be found on Wilcox’ menu just a short few weeks ago. You will spot lighter fare, with sauté’s and seafood being the focus. 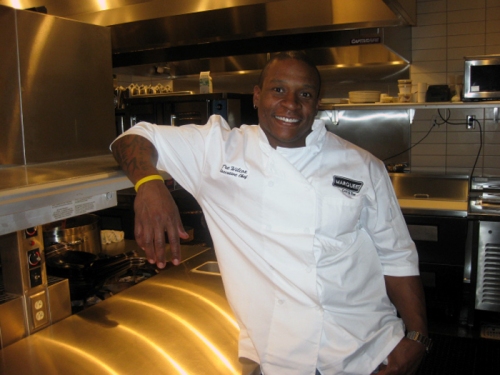 Wilcox is also preparing for another menu that he will reveal soon. The chef will be a guest at the James Beard Awards, cooking for the Awards Gala Monday, May 7, 2012 at Lincoln Center’s Avery Fisher Hall in New York City. This year the chefs were asked to take a recipe from one of Beard’s books and give it their own spin.

Looking back at the new lunch menu, we enjoyed more than just a few dishes, but there were some definite stars on the menu and we share those with you today.

You may still find the signature Duck Spring Rolls and the Sushi Roll of the Day on the menu, but now one of the bright stars are these Crab Cakes with a Tomato Vinaigrette Pesto

The Marquee Lobster Roll just elevated itself to  our staff favorite for Dallas, with its buttery toasted roll and meaty lobster chunks made of sweet tail and claw meat.

Another table favorite was this Tomato Leek Quiche that had a perfectly inviting crisp crust and a delicate creamy  custard filling laden with leeks.

One of the lighter, but equally satisfying dishes was the Roasted Beet and Lobster salad that featured a goat cheese terrine. Perfectly crisp and flavor packed for a cool Spring afternoon.

A new feature is Tre’s Lunch which is a Grilled Barramundi, Broccolini, Asparagus and Spinach. The fish was slightly blackened for another jolt of flavor. We are seeing Barramundi show up on more menus in Dallas. The fish is also known as an Asian Sea Bass, but the name itself is an Australian loan word.

There was a large list of desserts on the menu, but after sharing these dishes with a small group of friends, the sweet reward of the company was enough to carry us about our day with happy satisfaction. (We were filled to the brim.)