Hunkered down in the mess of construction rests a simple village of restaurants that includes a Bob’s Steakhouse outpost, a Fireside Pies, and something fairly tasty called Winewood Grill, all tucked away just off the bow of that nightmarish road rework alongside Grapevine, Texas. Also joining in the square is a newish anchor that has been running strong since October 2011, Mia Dia From Scratch.

Mia Dia is cheffed by Gabriel DeLeon sho you may remember from La Margarita in Irving, and  Masaryk Modern Mexican Kitchen in Addison which no longer exists. The chef might have been a foreshadowing of the scene to come and joins well executed Mex-Mex in the area like Abraham Salum’s Komali in Uptown and Mesa Veracruz in Oak Cliff as prime examples of how technique, use of fresh imaginative ingredients and the love for proper Mexican cookery should be plated.

The chef is smart enough to realize that you cannot survive selling purely authentic dishes from Mexico. You will have a guest looking for an enchilada, and will most likely be disappointed unless he is served a cheesy filled tortilla alongside his table mate’s Sopes and fiery Esquites. These folks will be treated to a New Mexican style stacked enchiladas glazed with Hatch chiles and topped with the quintessential fried egg. They will also enjoy the clean tastes of blue corn tortilla quesadillas filled with huitlacoche, three cheeses, black beans and fresh kernels of corn.

The huitlacoche is the prized corn smut that is often regarded as the Mexican truffle, but is considered a curse on American corn crops. The rich, smoky corn flavor is beautiful and earthy. Find its best use as an ingredient at Mia Dia in the Relleno de Huitlacoche which is a crustless Poblano chile, fired and filled with roasted veggies and queso asadero set in a shallow pool of corn saffron reduction. The dish will make you rethink the humble relleno and come back for more, as it is haunting and packed with deep flavors. 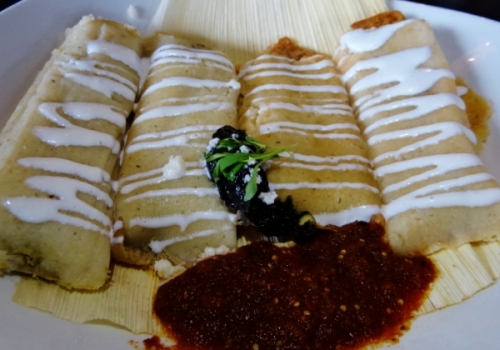 The tamales can be ordered as an appetizer and are large enough to share, with four to an order. The tamal is stuffed with shredded pork, New Mexico red & green chile sauces, and topped with crema and three chile salsas. These are moist and are interior-style tamales rather than the typical drier corn husk wrapped version often found in Texas.

Tequila is also a grand prize at Mia Dia with many top flight bottles and a long list of margaritas to choose from.

The interior of the restaurant is as vibrant as the food itself, with clean lines of metal, glass and bright fresh fruit photos that are just as delicious. This restaurant belongs on your list of things to do this week. Look for a new location in Plano in 2015.