Combahee Plantation is located on the banks of the Combahee River which is considered to be the jewel of the ACE Basin (Ashepoo, Edisto, and Combahee (ACE) Rivers). The property was originally part of a royal land grant from the King of England to Daniel Heyward (1720-1777) patriarch of the Heyward family of rice planters. It was known throughout Antebellum times as Hamburg.

One of Heyward’s sons, Thomas, was a signer of the Declaration of Independence. The original house on the plantation was burned during the Civil War and the present house was built in 1871-1872. An 1830 frame cottage was moved from elsewhere on the plantation and stands adjacent to the main house. During the Antebellum Era there was a tribe of Natives called Yamasee Tribe which are now extinct but some African Americans carry the lineage of the Yamasee Tribe due to intermarriage and relations.  END_OF_DOCUMENT_TOKEN_TO_BE_REPLACED

A History of Carolina Chicken Bogs

This story takes place in Horry County South Carolina during the 1800’s on a plantation owned by Captain Henry Buck who was originally from Maine. This area was also the home of a Native Tribe called Chicora who lived along the Pee Dee River all the way up to Cape Fear River North Carolina. Rice and timber was the main source for economic wealth in this area and Henry Buck was one of the main controllers of these two resources.

It is recorded that Henry owned over 100 slaves on his plantation on the banks of the Wacamaw River which also ran along with the Pee Dee River. On this plantation it was said that the slaves who worked this land were treated very kindly by Henry and that they were also compensated for their labor. The slaves on this plantation were also allowed to plant their own vegetables and raise their own livestock such as chickens, goats and pigs. With large amounts of food resources the slaves would make sausage, ham and bacon which were smoked in a shed that was built just for the purpose of smoking.   END_OF_DOCUMENT_TOKEN_TO_BE_REPLACED

This story takes place in the swamp areas of the Santee River during the mid to late 1700’s also known as Berkeley County South Carolina.  General Francis Marion (Swamp Fox) was born on his family’s plantation in Berkeley County South Carolina this area was also the home of a Tribe of Natives called Santee; growing up in this swampy marsh area a young Francis Marion decades before he would become a General in the Continental Army and the leader of the South Carolina Militia who won a series of battles against the British during the Revolutionary War that took place all over the great state of South Carolina.

It has been recorded and documented that America’s Independence was achieved in the south but declared in the north.  Francis Marion was a true scout and a survivalist which he learned on his families Plantation due to the relationship he developed with the Santee Natives. The Natives taught Francis Marion all what he knew about life and survival along the marsh swamp areas of the Santee River. They taught him how to forage the land for root vegetables which he was very fond of; also how to hunt game and fish from the river.  END_OF_DOCUMENT_TOKEN_TO_BE_REPLACED

The Evolution of South Carolina BBQ

At the base of Calhoun County, right where the Low Country of South Carolina begins is the town of Cameron. Here in this small town lived a tribe of Native Americans called Kusso-Natchez Tribe also known as Edisto Indians. This tribe lived along the Santee River around the late 1600’s the land along this river was purchased by an Englishman named Alexander Cameron who owned a 2,600 acre plantation in Abbeville which was given to him for his services in the French-Indian War.

Alexander Cameron purchased this land currently known now as Cameron, South Carolina for its abundance of pecan trees and the soil was perfect for the growth of cotton. Alexander would have some of his slaves come from the Abbeville Plantation to work on his newly purchased land to man cotton and pick pecans. During their stay on the land the slaves started to hunt and fish along the Santee River. This is when they encountered the Kusso-Natchez Tribe who they befriended and began to have an interesting relationship with.   END_OF_DOCUMENT_TOKEN_TO_BE_REPLACED 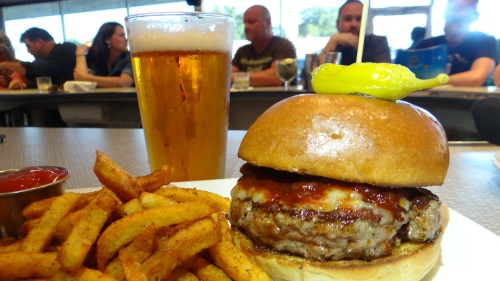 Oak Cliff is home to many fine restaurants, and we understand that is a trend that has no intentions of slowing down. Nova is one of the more interesting and funky restaurants located in the Kessler X+ district, and has always offered an ambitious menu, along with sturdy cocktails and a fine beer list. The talent of Chef Eric Spigner, who has major ties to southern cuisine, shines brightly in his latest menu that offers plenty of springtime, and a heavy dose of local.   END_OF_DOCUMENT_TOKEN_TO_BE_REPLACED

Each week we ask the question, “What’s Eating Your Phone”? This is where we all can join in on the foodie fun and send in your latest dining photo that has you all jazzed. These are not necessarily limited to dining out, it can be from that last dinner party. And don’t think we discriminate against libations. Send in your favorite cocktail photo, too.

To be included in a future edition of What’s Eating Your Phone, send those photos to me at steven@cravedfw.com. A brief description and location would be super helpful. Here are this week’s selections:    END_OF_DOCUMENT_TOKEN_TO_BE_REPLACED